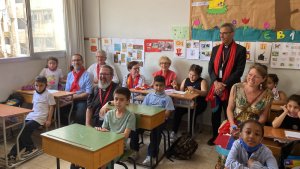 The dioceses of Lyon and Antelias in Lebanon have been living the adventure of twinning for more than thirty years. Beyond borders, rites and trials, the process is an opportunity to fully experience brotherhood in Christ and solidarity in action, here and there. By Florence de Maistre.

“This twinning is a real opportunity and mutual enrichment for our dioceses of Lyon and Antelias in Lebanon. The Lord acts at the heart of our exchanges. All those who live the process, testify to a before and an after in their lives”, shares Pierre Pouillevet, general delegate of the twinning for the diocese of Lyon. In May 2022, a delegation of about thirty diocesan Lyonnais went for four days to Antélias. It was the first trip for Archbishop Olivier de Germay of Lyon, who met his also newly appointed counterpart, Archbishop Antoine Bou Najem, Maronite Archbishop of Antelias. Objectives of the visit: to respond to the great expectations of the Lebanese, to show them help, support and fraternity, to develop the links woven between the two dioceses. The immersion in poverty and the meals shared within Lebanese families remain one of the highlights of the stay. “Our two bishops were received by a widow and her child. At the end of the stay, Bishop Bou Najem shared his wish to take up accommodation in this neighborhood among the poor.”, reports Pierre Pouillevet. 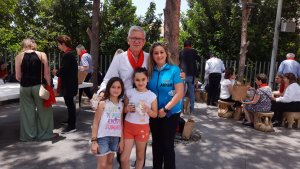 The links between Lyon and Lebanon go back to the time of the Crusaders, then that of the trade in silk threads weaves the first relations of fraternal friendship. The arrival of teaching religious congregations marks another strong educational and cultural link. But the twinning is truly born of a response to the call of John Paul II, 31 years ago: following the civil war, the Church must come to the aid of the Church of the East. Card. Albert Decourtray, then Archbishop of Lyon, sent a delegation to Lebanon, launched various initiatives and welcomed many students to his diocese. Among them, two seminarians from the diocese of Antelias who, out of friendship for the archbishop, encouraged the idea of ​​twinning. The latter develops first between different entities of the diocese. Thus the Institution des Chartreux with the Saint-Georges de Zalka college, 10 minutes from the center of Beirut, and the parishes of Saint-Joseph des Brotteaux and Saint-Joseph-Haret-Sader, in the poverty belt of Beirut, are the first to embark on the adventure.

The challenge of knowledge and mutual support

Today ten schools and eight parishes participate in the twinning, which became truly diocesan in 2004. That is to say that each entity organizes its exchanges in the way it wishes, and creativity is at the rendezvous. : student sponsorship, class trip, common study themes, concerts, solidarity flea markets, Lenten actions, video prayer group, etc. But all are part of the charter signed by Cardinal Barbarin and Mgr Bechara Rai on May 7, 2004 and undertake to deploy its four axes. Openness, meeting, sharing, prayer: this is the spirit that leads and animates the diocesan process. “The human encounter is essential, it allows us to tame. Sharing our joys and sorrows helps us to understand what we experience as brothers within the universal Church, beyond material help. Prayer cements everything, we walk together in faith”, specifies the diocesan delegate for twinning. Each quarter, a time of sharing brings together the actors of the twinning.

“We experience a very great richness on both sides, a mutual enrichment. The action is not a one-way street. Our contribution is rather on the material side. Those who go there also receive a lot in terms of faith and values. The Lebanese have great modesty, he always stands upright, he is very supportive: what life lessons”, continues Pierre Pouillevet. Both a municipality and a diocese, Antelias is located 15 minutes north of Beirut. The population gathered mainly by the sea is currently marked by the absence of a middle class. She is either very poor or very well off. For several years, the economic, political and financial crises have been testing the whole country. In October 2019, following the announcement of new additional taxes, in particular on online calls (whatsapp), the population took to the streets. “Christians, Muslims, young people, elders: we witnessed a rare moment of unity. Lebanon has 3.8 million inhabitants, but there are 13 to 14 million in the world, hence the importance of means of communication! As a result of the various currency devaluations, people are ruined and in deep psychological distress. Everything collapses ! Even the situation of schools, the flagship of the Middle East, is in question. The equation is with multiple unknowns, impossible”says the diocesan delegate.

Everything collapses ! Even the situation of schools, the flagship of the Middle East, is in question.

Shortages of water, wheat, electricity, medicines, riots with Syrian refugees for some subsidized products, not to mention the explosion in the port of Beirut and the Covid: the circle seems infernal. “The very complicated geopolitical context is beyond us. Peace is threatened on this Holy Land, evoked in seventy biblical passages. The Christians present in the Sunni and Shiite villages are the cement. They must resist and avoid expatriation. The country is the place of the people and the people the soul of the country! By living among them, you tell yourself that this is the place where you should be”. assures Pierre Pouillevet. He resumed : “The fact of going there, even without bringing anything, is precious for the Lebanese. They are sensitive to the fact that we are interested in them, to our presence at their side. Our support is moral, spiritual and financial”.

The fruits of twinning are many and varied. The exchanges between people turn into friendship. The joy of fraternal prayer, the joy of living the universal Church brings together the diocesan beyond borders and in their own places of life. The persons in charge of the diocesan services review their practices in the light of those of their correspondents in Lyons or Antélias, happy to reflect together on concrete problems such as the reception of catechumens and that of divorced and remarried persons. New projects are born. The idea is launched to bring together young people from the two dioceses, to bring together the living forces, on the occasion of the next WYD. Within the diocese of Lyon, the people in charge of young people, solidarity actions, communication learn to know each other better, work better and pray better together. “Twinning helps us to weave links at the heart of our parishes. It helps us to form a community”, emphasizes Pierre Pouillevet. He evokes this person who participates every year in the solidarity parish flea market for Antélias and for whom it is the time of the year with the strongest encounters. The diocesan delegate intervenes in schools, with pupils from kindergarten to high school. The testimony is simple, the return of young people eloquent. Pierre Pouillevet punctuates: “it strikes, it forces us to think about our mission”.