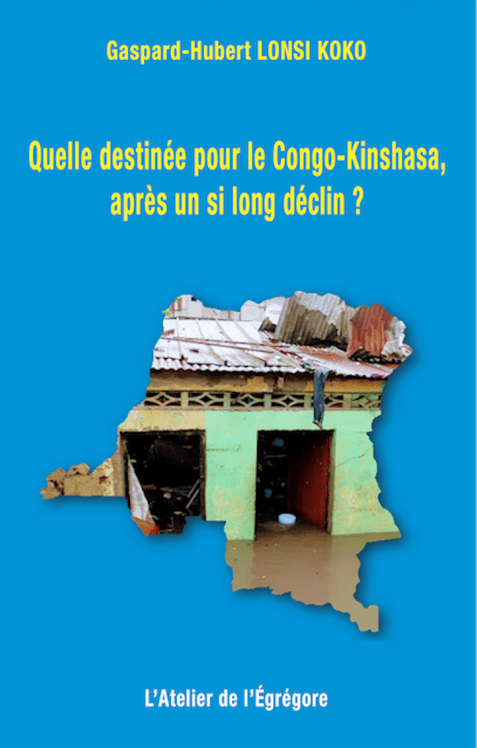 How can we explain the extreme poverty that strikes the Congolese populations, with a GDP per capita of 622 USD in 2022, while the country is sitting on at least 24,000 billion USD of natural resources? How can we have a very high unemployment rate in a country where the opportunities for job creation are immense? Does the Democratic Republic of Congo (DRC) really need to live forever on begging?

Some are aware of the fact that the History of a Nation cannot be understood through the prism of fanaticism, tribalism, or for partisan reasons. This must be done on the basis of the actual facts or, failing that, of their interpretation in all objectivity. The Great History of the DRC must therefore be approached with complete impartiality, and not through individualistic or regional chauvinism.

In short, the Democratic Republic of Congo needs movement and innovation, saving momentum and renewal, courage and consistency in ideas. In addition, the management of a country necessarily involves a real social project: namely constructive perspectives. So, rather than the status quo ante or regression, we need a metamorphosis with a view to a glorious future worthy of a great engine of Central Africa!

The editorial staff of 7joursinfo distills a few excerpts from the essay “What destiny for Congo-Kinshasa, after such a long decline? by Gaspard-Hubert Lonsi Koko of 308 pages published by L’Atelier de l’Égrégore in November 2022:

“Some are however aware of the fact that the History of a Nation cannot be apprehended under the prism of fanaticism, tribalism, sectarianism, or partisan reasons, or even neocolonialism”.

“The Congolese have always had a preference for wealth in freedom, and not poverty in submission. Only patriotism will allow them to get out of the dangerous game and the dishonest stratagems that certain neighboring countries are constantly trying to impose, by all means”.

“It is very difficult to develop a state from a social and economic point of view without being animated by a real political will. The management of a country necessarily involves a real social project, namely constructive perspectives. This will not be done on the basis of tribal foundations, nor by the arrangement with the outgoing president, nor by the tampering with the electoral results or the submission vis-à-vis the leaders of neighboring countries or international partners.

“Only mastering a few social and economic parameters, as well as institutional ones, will allow the national government to fully play its giant role in Congo-Kinshasa, both regionally and continentally, with a view to a affirmation of Africa on an international scale”.

“How can you have a very high unemployment rate in a country where the opportunities for job creation are absolutely immense? »

“But we should always bear in mind that, whatever the approach chosen, their help is very costly in the short, medium or long term”.

“Rather than continuing to live ad vitam æternam thanks to external contributions from the financial point of view, to exist on the hook of donors, the Congolese government must begin by mastering the mismanagement and making its resources available through the transfer of techniques and technology. This will allow the development of national infrastructure for the on-site processing of raw materials, as well as the free movement of goods and people”.

“The internal dynamic must finally allow, once self-management has been effectively mastered, the policy of orientation towards exports within the framework of globalization”.

“Currency being one of the capital elements of national sovereignty, in addition to budgetary rigour, the Congolese government must master the total control of this instrument of exchange, or standard of values ​​or store of value. Consequently, for the sake of monetary independence, the value of the Congolese franc must be aligned with the natural resources available to the Democratic Republic of Congo and not with any foreign currency”.

“Furthermore, no Congolese citizen has given another country, or an extranational organization, however international, the mandate to govern this giant that is Congo-Kinshasa, nor to ensure its internal security, if only by proxy. If the Congolese citizens continue to no longer take care of their own affairs, other peoples – starting with their neighbors – will not hesitate at all to do it in their place at the expense of internal interests”.

“Commitments in terms of sustainable development conducive to the consolidation and control of political multilateralism, as well as import and export, are necessarily essential”.

“With regard to internal security, it is absolutely necessary to favor an evaluative and reflexive approach in support of the policy of national defense and regional security, internal and external trade, diplomacy and good neighborliness, civic and patriotic education, cultural, sports and professional training…”

“This is why constructive federalism or decentralization, as well as solidarity between provincial entities, should help to avoid the development of antagonisms between minority populations and majority groups”.

“This will in particular avoid serious conflicts and bloodshed, a phenomenon which could shatter the integrity of the national territory with the possible risk of a terrible and harmful effect of regional contagion, or, even worse, continental for the benefit global financial powers.

“It is obvious that one is Congolese by ancestral origins, namely ‘father and mother’, father or mother, by legal means and not by occupation or aggression, nor by the use of sexual or physical violence, nor by the spilling of Congolese blood”.

“Every time Congolese blood is shed, even a drop, patriotism must multiply even more. This is the national pact! »

“In all their plurality, Congolese citizens must embody with conviction the unconditional expression of diversity in unity”.

“Furthermore, the survival of indigenous populations requires loyalty to the national motto: Peace, Justice and Work. They must never, and under any circumstances, betray the Fatherland! It is absolutely essential to consolidate the foundations of an undeniably plural and completely indivisible Congo. This is the great duty that every Congolese citizen must accomplish, because it is a question of the durability and intangibility of the borders inherited, despite everything, from colonization and, henceforth, recognized as such by all the international institutions. There is absolutely a summons, hic et nunc, at the national borders above all not to move inwards”.

“Statism must in no way be characterized by the dirigisme of an irresponsible administration acting systematically by clannishness, by exclusion or renewing itself by cooptation or favouritism”.

“In the Democratic Republic of Congo, the State must precisely encourage entrepreneurship while at the same time ensuring the mechanisms specific to the non-exploitation of wages”.

“The Congolese must strengthen their love for the Fatherland, in order to live in complete synchronicity in a very vast space, which has been sovereign since June 30, 1960. Above all, they must love work at any price and sacrifice, at the same title as the land of their ancestors or of their choice.

“A country where the State will always protect the weak, and the majority populations will never cease to ensure that the rights of ethnic minority individuals are safeguarded. Above all, we must favor the appropriate ways and means with a view to satisfying the daily aspirations of each compatriot, regardless of their gender, social rank, physical or mental abilities, ethnic group, origin before naturalization… »

“The Democratic Republic of the Congo must, at all costs, become a country where intergenerational and interaction between fellow citizens and the various provincial entities will strengthen the will to live together, wonderfully combining solidarity and development, happiness and well-being. , freedom and equality, patriotism and sovereignty”.

“The Congo of the future will not be able to afford to do without intelligent diplomacy benefiting from the unfailing support of a republican and efficient army as a deterrent”.

“In this order of ideas, with regard to family and customary logic, as well as spiritual and ancestral, it is also necessary to proceed with the amendment of article 10 of the fundamental law with a view to clarification and confirmation, as to the inalienability of Congolese nationality of origin and its primacy over any foreign citizenship”.

“Leaders with breath and a humanist vision will only finally be able to offer them the dream after which they have always run and not the inventory of the possible that has never ceased to decline with demagogy, too often with cynicism, the greatest majority of political actors.

“Above all, let us never forget that the work of the executioner is accomplished first by falsifying the facts, then by brainwashing and, finally, by perpetuating the single thought. Three scourges that we must fight at all costs for the triumph of democracy and the development of humanist values”.

“In short, like all countries that have developed, the Democratic Republic of Congo needs movement and innovation, life-saving momentum and renewal, courage and continuity in ideas”.

Literature: “What destiny for Congo-Kinshasa, after such a long decline? by Gaspard-Hubert Lonsi Koko is on the market. | 7joursinfo.com