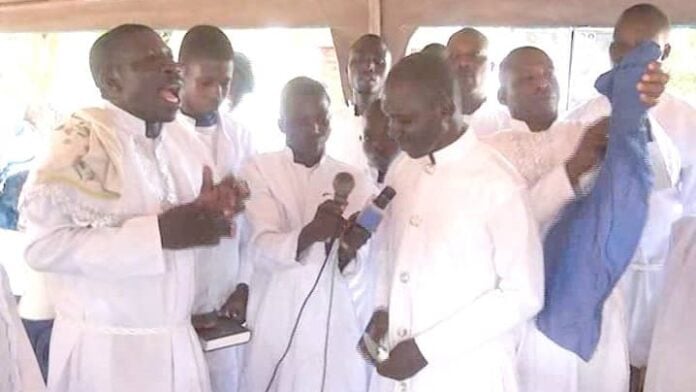 Antoine Odjo becomes Prophet Malachi, by virtue of his baptismal name. This ordination is part of the overall framework of the activities marking the celebration of the 2022 edition of the annual convention started since November 6 within the Témidire New glory Okiki Ayo Seraphim and cherubim church Nigeria and overseas.

It is the crowning of the process of the ceremony of his ordination which took place in Ilara, Nigeria, Sunday, November 13, 2022. The event took place according to the agenda drawn up for the cause. The laureate underwent all the rituals and in this respect we retain that of the baptism which took place at dawn on Sunday. The rest follows in the following hours. On this chapter, there is one whose high point exceptionally holds the attention. This is the anointing stage. A solemn moment of spiritual rebirth and its liberating effects, this ritual is supported by cries of Glory to God: Alleluia! chanted in chorus by the crowd of faithful.

But before, the intense prayer with exaltation of the teachings. In other words, let us note that with the help of the Bible pointed above the winner’s head surrounded by a compact crowd (the person in charge in the first place, his staff and their godchildren), biblical passages recited publicly orchestrating a spotlight on the ins and outs of the mission. After which, place to the sermon of the predecessors followed by the animation of the choir of the parish through hymns and dances of praise and adoration. Thus invested with his new mission by the founding prophet Oke Témidire New glory, the latter enjoins him to address the faithful and distinguished guests who have come from various corners of the world to testify to their fidelity to this church and beyond God and to his word.

Indeed, after having seized the spittoon, Prophet Malachi speaking in Yoruba and French languages, in these terms, “I thank you. I just took the anointing and now I am Reverend Prophet. My main mission, quite true, is evangelization, but my hobbyhorse would be against ingratitude. In addition, I intend to promote the tithe which is a very important spiritual duty in the life of the Christian. In addition, I have the duty to advocate peace, unity, harmony, forgiveness so as to bring lost souls out of darkness and bring them to the light of God. May the Lord help us! »

In reality, Antoine Odjo discovered the mission of serving the people of God for 4 years. But he spent three good years wondering about the veracity of what is happening to him, even if it means making up his mind. At the same time, he was an actor in certain divinatory practices. Passed the stage of the interrogation, he ended up being convinced of it. Today Prophet Malachi that he has become must work on the conscience of men in search of the truth and the path of truth, obviously relying on evangelization. Journalist by profession, Antoine Odjo is the founder of the press group Mutations Africa.