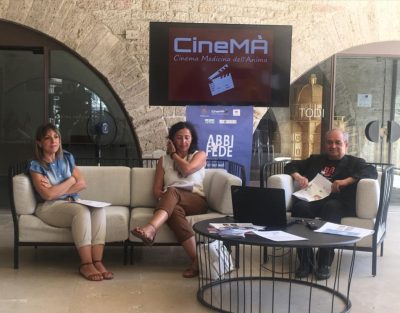 Kicks off today, 5th August (for end on 20) to Todi – in the Amici dell’Orto garden and every evening – the third edition of “International days of religious cinema” entitled “Have faith!”, an initiative promoted by “MediCinema-Cinema Medicine of the Soul ”.

In the era that wants cinema reduced to a spectacular commodity for domestic entertainment, in Todi a filmic fruition project based on community, debate and reflection is being experimented.

There review is directed by Alberto Di Giglio with the patronage of the Municipality of Todi, the Fondazione Ente dello Spettacolo, the monthly Edav founded by the Jesuit mass media scientist Father Nazzareno Taddei, of the Historical Archive of Italian Cinema directed by Graziano Marraffa, of the weekly The voice and of Umbria Radio directed by Daniele Morini.

“The event of maestro Di Giglio – the councilor for Culture said during the press conference Alessia Marta, also present the journalist of La Nazione Susi Felceti – confirms for the Administration an unmissable appointment for the cultural program of our city. A review that allows not only to enjoy beautiful films, but also to have an introspective look through meetings and insights. Thanks to his direction we can count on the presence of nationally renowned actors who will make your evenings more precious for citizens and tourists ”.

The title “Have faith!” derives from an exhortation of common sense and from the homonymous film by Giorgio Pasotti which will be screened on two occasions, the 5 and 14 August. As the protagonist of the Dane Adam’s Appleswho knows how to persevere against a thousand storms, Pasotti in his unmissable remake it invites us to look up confidently when we are in trouble.

Inauguration with the Gospel Act Sisters

To precede the film by Pasotti, scheduled for 21.45the inauguration (19.30) will be entrusted to Gospel Act Sistersa group that combines Afro-American religious suggestions with vocals that go beyond classic to pop and the poet Ottavia Pojaghi Bettoni with Poetry in the cinema.

A film like Where are you brother? by the Coen Brothers (6 August). It’s a hilarious biblical comedy, between road movie and moral fable, in which we ask ourselves if we are still able to recognize the face of the Brother. It will be anticipated by a match with the actor Luca Lionello who will tell us about his career with great directors such as Mel Gibson and Abel Ferrara.

The August 7 Medicinema’s tribute to Pier Paolo Pasolini with a masterclass by Luigi Boneschi, documentary maker and writer, on Il Sacro in Pasolini. In the conversation he will take inspiration from films such as Ricotta, Theorem, The Gospel according to Matthew with the relative Pasolini travels for the inspections in the Holy Land and more generally from the themes of the great Italian author.

L’8 August with the classic Ordet-The word by CT Dreyer, in which we manage to believe, with the simplicity of children, that even death is inhabited by the hidden breath of faith in the Word of God.

Meeting with the poet Davide Rondoni

A meeting in three stages, between 9 and 11 Augustis with the poet Davide Rondoni, with a trilogy on dramatically topical themes ranging from the inhuman drifts of power to visions of a desacralized Christ. And to rediscover cinema in its role as a compass for a lost humanity. The films that give him inspiration are Doctor stranamore by Stanley Kubrick, Orwell 198 ″ by Michael Radford e The last temptation of Christ by Martin Scorsese.

Friday August 12 it is the turn of Alessandro Haber who will present to Todi his intense interpretation of Traveling with Adele by Alessandro Capitali.

The meeting with Liliana Cavani

The August 13 is for an exceptional meeting with Liliana Cavani to which the special mention MediCinema, Cinema Medicina dell’Anima and his will be screened Francisin which an extraordinary Mickey Rourke literally lays bare the vitality and energy of a saint who is unparalleled.

The Marian day of Ferragosto is dedicated to a truly unmissable film for atmosphere, music, interpretations (from Jeremy Iron to Robert De Niro): Mission by Roland Joffè. A film in which we follow in the footsteps of the heroic Jesuits in the inaccessible areas of the eighteenth-century Amazon, in defense of the unarmed Indians against human greed.

In masterclass of the August 16 from Rosario Tronnolonefilm critic of Vatican RadioGod’s cinema … Roberto Rossellini’s gaze and Ingrid Bergman’s light in films such as, Stromboli, Europe 51, Giovanna D’Arco, I travel to italy, Fear.

The August 17th is dedicated to the restlessness and inspiration of Andrei Rublev (the painter in creative crisis surrounded by the violence of Russia in the 15th century) in the gaze of the great Andrei Tarkovskij: of which the August 18 will also be screened Stalkerabyssal portrait of the restless man in front of the mysteries of creation, The two Tarkovsky evenings will be introduced by the film critic of Cinema, director and screenwriter Massimo Nardin.

Such a masterpiece The great silence from Philippe Groningwill be the protagonist on Friday 19 August with the mystical atmospheres documented in the Great French Charterhouse: to rediscover the indispensable experience of listening.

Closing on August 20 with Babette’s lunchin which the writer Karen Blixen it is translated by the local director Gabriel Axel in an evocative journey through the lives of a foggy north victim of the lack of grace and love.

A cycle of certainly beautiful films, often extraordinary, able to offer the public – including meetings with great guests and moments of “apericinema” – great cinema evenings.