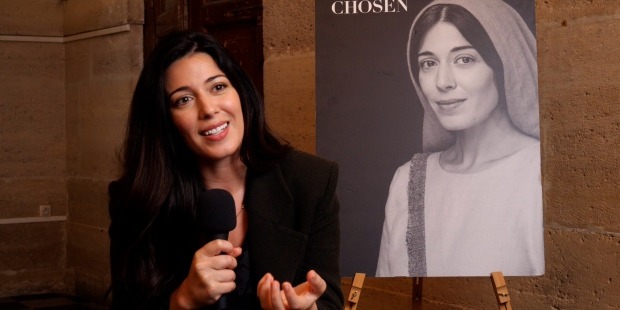 We have something special for you. Find your employer for 2023!
This saint will be your intercessor and support. Click the button below 👇

If something characterizes the series “The Chosen” it is the way in which it narrates the transformative impact that Jesus has in the lives of those around him and deal with him. And if something characterizes the social phenomenon that surrounds this peculiar television program that recreates the gospels, it is the way in which it touches its viewers emotionally from within, multiplying experiences of grace on a small domestic scale. Well, now we know that its actors have also been touched by this unique project.

Three of the performers of the series created and directed by Dallas Jenkins visited Spain to promote the relaunch of “The Chosen” in our country, taking advantage of the fact that it has Spanish dubbing for the first time (until now there was only the option of Latin Spanish) and that The publisher Acontracorriente has promoted new ways of accessing its content: the Acontra+ platform, home video (with DVD and Blu-ray editions of the first season, which just hit the market this week), and since December 2 , movie theaters, with singular projections of the eight episodes of the initial season of the series grouped into three different and consecutive sessions (on December 2, 9 and 16).

At the Valladolid International Film Week, where the new dubbed version of the first season premiered -with the assistance of Archbishop Luis Argüello- the actress Elizabeth Tabish, who plays María Magdalena, offered a very sincere testimony of how the series transformed her life.

«I was in a state of depression when I got the part. I was in a vicious cycle of self-medication, drinking every day… I was dealing with pain in the worst possible ways and only expected negative things from the world; I was very pessimistic”he recalled at the Valladolid film festival.

«But after this role of María Magdalena there came a moment in which I thought: ‘well, something positive has happened to me, very very positive’. And since then it has been an incredible experience: the reaction of the people, the experiences we have had with them… I feel that I have opened my heart. I was wrong; she had a very pessimistic attitude,” Tavish confessed with disarming candor. «And now I believe that there is so much beauty in the world and so many kind people… It has made me change the chip and I have renewed my humanity ».

The interpreter acknowledges that interpreting a relief figure of Mary Magdalene “is intimidating.” “It seemed important to me to focus on the love that I have for Jesus Christ, from the bottom of my heart, instead of feeling overwhelmed by this incredible historical figure,” she explained.

And he added: «I find the way this character has been written inspiring. In the last season we have seen him have doubts about whether he will be able to live up to what is expected of her. And we see that it is human to make mistakes, although we have to try to do our best.

The fictional Mary Magdalene acknowledged that ‘The Chosen’ has surprised her with details about the evangelical episodes that she was unaware of and that have forced her to consult the Bible to verify it. «She has admired how much they have investigated for the series. I was always learning new things.”

“I think everyone knows the story by now. But the way it is told is very genuine, very human. Very raw and honest. With the traumas, fears and sufferings that we all experience in life. We also show the transformation of those feelings and how people change after knowing Jesus Christ. It is a novel way of telling the story. That’s what gets people excited,” he adds.

During the promotion in Spain, they accompanied ‘María Magdalena’ Noah James, who plays Andrés in fiction, and Amber Shana Williams, who gives life to Tamar, a character that does not exist in the Bible and who represents many of the beings anonymous with whom Jesus of Nazareth came across. Shana Williams is based in our country and speaks fluent Spanish.

“This character has changed me a lot because his story is about faith and it’s something I’ve always had problems with”he acknowledged. “Tamar has been kind of a role model for me on how to lead a life guided by faith.”

The interpreter highlighted the courageous way in which the scriptwriters fill in the shadow spaces of the Gospel accounts and their ability to do so while respecting the biblical text and what we know about its context from historical research.

“What I really appreciate is that no theme has been hidden” and advanced that the new chapters of the third season will tell things that can make viewers uncomfortable. “But that is going to force you to look inside yourself and evaluate what is your vital objective and our potential as human beings.”

The third season was released in theaters in the US a few days ago with great success -it was placed as the third most viewed film of the day after ‘Wakanda forever’ and very close to ‘The menu’- and is about to reach the App The Chosen, the series’ own free broadcast mode. The promoters are already raising funds for the filming of the fourth season. At the moment they have already completed what is necessary to shoot the first two chapters and they have raised more than 80% of the third episode through micro-donations, according to what they say on their own platform.

Also for Noah James, the actor who plays the Apostle Andrew, the series has been a personal shock. “It has completely changed my life,” he admits. “As an actor we are asked a lot to show humanity and that gives us a lot of life.”

James is a secular Jew, not a practitioner of his religion, and was largely unaware of the Christian religion. He represents the great diversity of beliefs, and non-beliefs, that have come together around an unequivocally confessional project, but with a human register and a narrative power that go beyond.

«We make the series people of different beliefs and contexts, with different perspectives, who put the best of ourselves. I think this enriches the material,” says James. And, furthermore, for the interpreter it was an opportunity to learn about Christianity.

“Because I came from outside the Christian tradition, I thought: what better way to become familiar with the teachings of Jesus Christ than to sit with him at a table and listen to him?”, as his character often does throughout the series. “He has been fascinating. In season one we see how he preaches and I listen to him like he’s never heard before. He has opened my eyes and made me a more open person. I am very grateful to this project.”

How “The Chosen” changed the lives of its protagonists