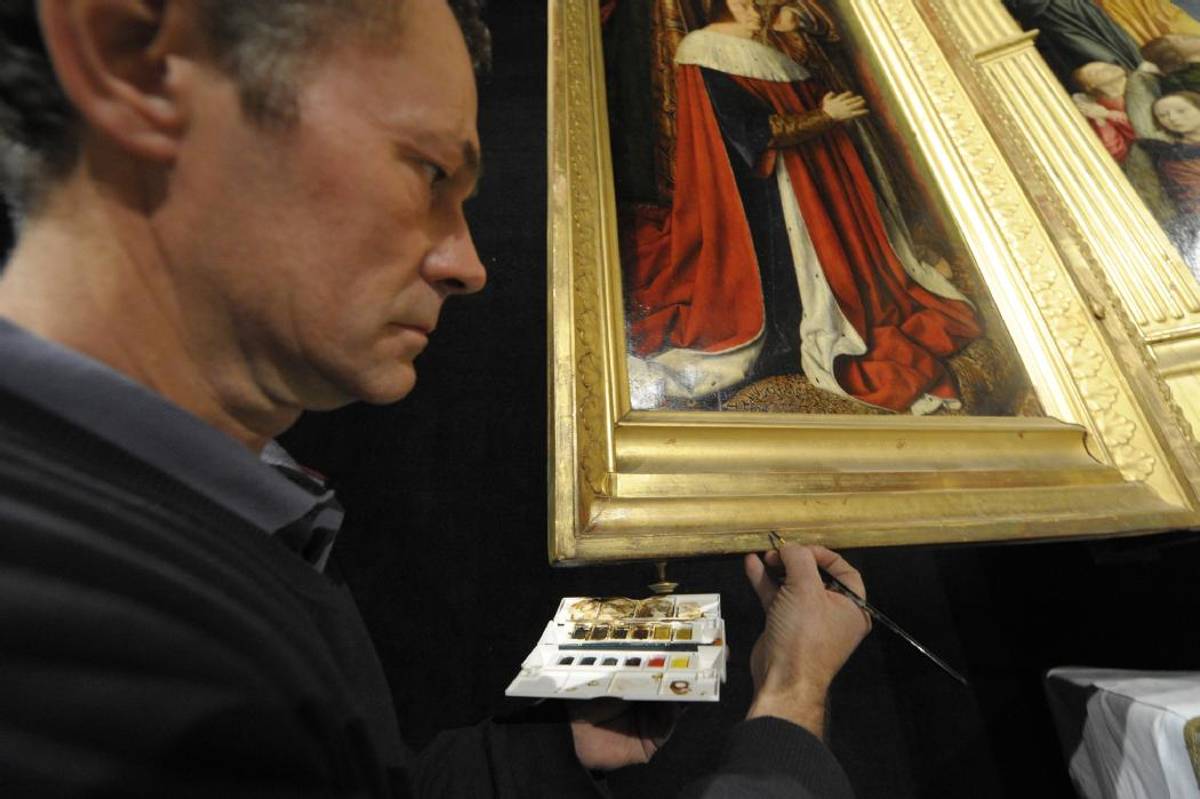 The cathedral of Moulins shelters a treasure, the triptych of the Master of Moulins. Work of Jean Hey dating from 1509, this triptych is the subject of all attention. Classified as a Historic Monument, it is state property (like the cathedral). Already restored in 2012 (its frame) and in 2018, it will leave for Paris for its restoration. An exhibition around the work of the Master of Moulins, at the Louvre Museum, is also planned. The Drac Auvergne-Rhône-Alpes answered our questions.

When does the triptych leave? The triptych of the Master of Moulins will leave the cathedral on November 9 to join the workshops of the Center for research and restoration of the museums of France (C2RMF), in the Tuileries garden, in Paris.
How many months will he stay away from Moulins? The restoration time for the triptych is estimated at eighteen months. At the same time, a major project to redevelop the sacristy and make the cathedral more accessible will be carried out, entrusted to the chief architect of historical monuments, which should last twenty-four months. The triptych will return to the cathedral as soon as the work on the sacristy is completed.

Under what conditions is the altarpiece transported to the C2RMF? It will be taken care of by a carrier specializing in works of art, associated with a team of three restorers. The panels of the triptych will be separated and packaged in three boxes. The entire operation will take place under the supervision of State agents (Regional Department of Cultural Affairs), project manager of the operation, and teams from the Center for Research and Restoration of Museums of France ( C2RMF) who provide scientific and logistical support.

The triptych of the cathedral of Moulins during a previous restoration, in 2012. Photo Philippe Bigard

A scientific committee responsible for monitoring

Who are the different experts in charge of the restoration of the work ? The restoration will be entrusted to a team of restorers specialized in the various fields concerned (painting layer, wooden support, gilded wood) and will be monitored in all its stages by a scientific committee bringing together in particular the representatives of the State owner, the assigning clergy as well as curators, restorers and academics specializing in French or Flemish painting around 1500.
What exactly is this restoration, which is 100% supported by the State? The restoration will consist in particular of reinforcing the structure of the work, reattaching the uplifts of the pictorial layer, cleaning the work, removing the out of tune repaints of the last fifty years, reintegrating the gaps or even restoring the wooden frames. Golden. The techniques implemented – which will respect the principle of reversibility – will be definitively chosen by the scientific committee during the restoration and the preliminary tests.

The exterior shutters in grisaille can be admired

During the restoration, the Drac will rethink access to the work, in the cathedral of Moulins. Can you explain the nature of the works, how much they cost and how will there be access to the triptych from now on? After the restoration, the work will return to the sacristy, where it has been for a century and a half. The triptych will be exhibited in an open position, but will be separated from the wall in order to allow visitors to admire the exterior shutters in grisaille without having to handle the work. The work, which amounts to several million euros, will allow accessibility for people with reduced mobility to the entire cathedral and the treasury, the enlargement of the reception area, the creation of a chapel weeks for assigned clergy and the development of reserves. Other little-known masterpieces from the treasury, in particular the exceptional textile and goldsmith’s pieces by Mgr de Dreux-Brézé, should also be exhibited in the future, all accompanied by new mediation media. The management of the future treasury will be ensured by the Center des Monuments Nationaux, but this setting will also remain the sacristy of the bishops, according to the wishes of the clergy.

“A spiritual and cultural attachment to this work”

“There is a strong attachment of the people of Moulins to the triptych, the parishioners of course, but it goes well beyond that”, assures Father Claude Herbach.
So, the rector of the cathedral gives an appointment to all those who wish to say goodbye to the triptych, Wednesday, November 9, at 8:30 am, on the square of the cathedral of Moulins, the day when the work will leave for Paris. The work attracts 12,000 to 16,000 visitors a year. Already, in recent days, he has noticed an increased number of visitors: “It is very moving. A scholar traveled from Paris to view the work one last time before its restoration. An octogenarian who had never admired her before will come to see her before she leaves…”

In a restaurant in Washington

The triptych, with Pierre II de Bourbon and Anne de France, on the side panels. In the center, the Virgin Mary and the child Jesus.

How to explain this attachment to the triptych?

“First, for his seniority. It had been commissioned by Pierre II de Bourbon and Anne de France for the cathedral and it has always been here. When I was a child, my grandparents took me to see him. For a long time, before the creation of the CNCS, the development of departmental museums was the work to be seen in Moulins. Tourists came for the Jacquemart and the triptych. There is a religious, spiritual attachment to this work, not just from Moulinois. Christians venerate the face of the Virgin of the central panel, known worldwide, even in Japan. It has been widely copied, plagiarized… I even saw it displayed in a restaurant in Washington! »

There is also a cultural, artistic attachment. “On the Sunday of the last Heritage Days, the visit attracted 900 people! There is a fear among some that the work leaves for Paris and does not return, while there is a consensus of elected officials and all the actors concerned for it to remain at the cathedral, where its access will be renovated. . No one has ever speculated that it will be shown anywhere else! One thing is certain, Father Herbach intends to celebrate with fanfare the return of the altarpiece, at the end of 2024. Its cultural management will now be in the hands of the Center des monuments nationaux. “It will be a shock to rediscover it, stripped of the layers of varnish that have been added in recent decades! “. In the meantime, he hopes that the dossier exhibition project on Jean Hey, planned at the Louvre, will come to fruition. With perhaps a smaller exposure to the cathedral of Moulins. In the meantime, a copy of the work will be exhibited in place of the triptych, with a panel presenting the restoration. This will allow us to continue to present the triptych, especially to schoolchildren.

A book about the cathedral. The parish of Notre Dame de Moulins is preparing a 300-page book on the cathedral with the contribution of academics and many photos, which will be published at the beginning of December (3,000 copies).