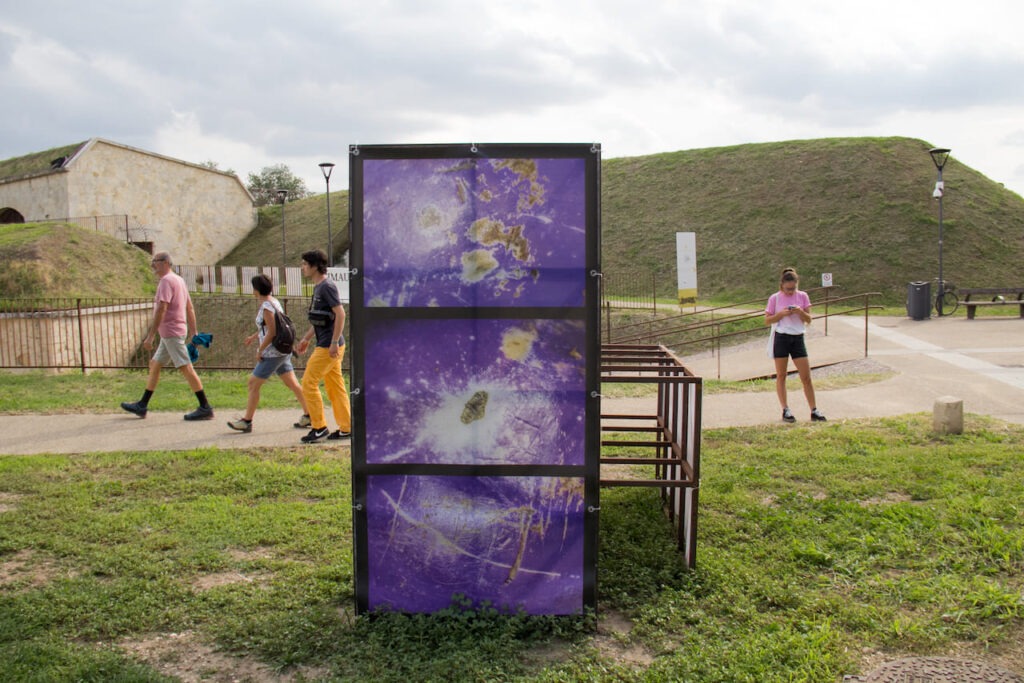 The Bastione delle Maddalene, in Verona, at the beginning of September was the protagonist of the fifth photographic exhibition of Grenze Arsenali Photo 2022. The Verona photography festival was born from an idea of ​​the teacher and art critic Simone Azzoni and the photographer and teacher Francesca Marra.

Fascinating and enigmatic, at the same time, this was the main location of the photography festival which for some years has replaced the exhibition activities of the International Center of Photography Scavi Scaligeri, suspended for restorations. A contingent of international artists who offered their own vision, with respect to the focus of the topic, which this year gravitated around the meaning of FALSCH.

But what does it mean Falsch? In German, this term means the semantic content wrong, false, inaccurate. And how to translate Falsch in our contemporaneity? This is the intent of the Grenze festival: to bring perception to the center of our intellectual reflections and in the concrete of everyday life.

Perception understood as consequence of the responses of our body, of our senses, of our way of interacting after being intended by the images. Is in the Bewusstsein – to remain in the Germanic language -, that we become aware, we become vigilant. Edmund Husserl, had identified the deception of his wax lady at the Panoptikum in Berlin at the end of the nineteenth century, laying the foundations for the phenomenology of image perception. A significant philosophical load, which today more than ever before the continuous proliferation of images with the interaction of information systems, places us before the question “What do images (really) want?“.

Title, the latter, sanctioned by William JT Mitchell art historian in 2005 and one of the most important exponents of the media theory that inspired this review. Photography yes, but it is in the vastness of visual culture – an affirmation that took place in the mid-nineties – that Grenze wanted to expand Falsch’s investigation, effectively proposing the contemporary meaning of Contemporary Photography.

In fact, Mitchell asked himself with this extraordinary essay “Why do we behave as if the images were alive, possessing the power to influence us, to ask us things, to persuade us, to seduce us or even to lead us astray?“. An extension of the shock from Walter Benjamin, who recognized as a pioneer already in the twenties of the twentieth century the shocking impact that the human being had with photography and cinema. A turning point and a perspective rethinking, that of Mitchell, in what we know as iconology. Science, the latter, which leads to the codification of the figurative work with the analysis of the formal and symbolic elements, referring to a historical time.

“We are not interested in the authenticity of the origin of the image but the originality of its destiny”Says the Grenze team. Here is the image, the reference to something else, to something that is in fact representation. It is making present. An image that is often the result of intentional manipulation. A fake.

The exhibitions at the Bastione of Verona

Who were, therefore, the protagonists of this central location?

The external frame of the Bastion featured two authoritative international photographers who presented the photographic imagery of South Africa. On the one hand, a selection of photographic works by Thania Petersen (1980), in sets and provocations. A desire for redemption of the society in which he lives: culture, traditions and religion, in an identity claim of historical belonging to South Africa, free of the stereotypes that too often we entrust to this part of the world.

On the other hand, the very young Sethembile Msezane (1991). The artist, who lives and works in Cape Town, touches on topics that represent spirituality, celebration and cultural organization of African knowledge, also asking questions about the ancestors of his culture. The project is exhibited in Grenze Kwasuka Sukela – Re-imagined bodies of a (South African) 90s born woman (2015-2016), which draws sensitive attention to the African female body. The figure of the woman, according to the artist’s investigations, is absent both in folk tales and in the physical presence of the country’s history.

The photographic series by Francesco Amorosino by title Fantastic Voyage. In this series, the photographer celebrates NASA’s recent discovery of exoplanets, unattainable for humans. With fruit and vegetables, Asimov’s stories and in combination with his own creativity, Amorosino wanted to propose a new solar system of his own hand.

The internal path of the Bastion proposed the interesting artistic work, made by Joan Fontcuberta and Pilar Rosado by title Dèja-Vu. The images shown are the result proposed by the GAN algorithm (opposing generative network), a system that consists of two neural networks (one good and one “bad” or fake) that, when trained, compete in a zero-sum game. The reworking of works of art is part of the collection of the Prado Museum in Madrid. In practice, the algorithm is asked to exactly reconstruct the selected image and in this specific case, being the system made up of a few images (only 7 thousand), it shows anomalies or … a new representation.

Klaus Pichlerwith the photographic project This Will Change Your Life Forever he immersed himself for two years in new-age or pseudoscience esoteric systems. The fake or the manipulation also pass from here: the social networks and the pandemic insecurity, have won the attention of most. Beliefs that have made their way between the frailties and desperation of people, disheartened and conditioned by uncertain times. Ideologies yes, but also business models that take root.

Kai Yokoyamawith the project The day you were born, I wasn’t born yet, did significant family history research done in the lockdown period. The time spent at home with her parents, made up of stories and backward investigation, gave Yokoyama a way to build a personal identity.

It is video art that of Ruben Torras Llorca by title Road Moview. Here the author specialized in “Environment and Realism” uses the localization systems we know, such as Google Maps and Street View, combining a reeanactment of mythical characters and objects together with known places that frame a new imaginary. Maybe a new virtual world as if it were a social network? Or simply a necessary fiction to want to lose reality on purpose to make the complexities of life lighter for a moment?

Secret Garden from Susi Belianska is a photographic series made within Villa Lante, one of the most famous Italian Mannerist surprise gardens of the sixteenth century, located in Bagnaia, a fraction of Viterbo, in Lazio. The intention of the author is to bring out an almost ethereal female figure with clothes that attract attention in a physical and mental labyrinthine landscape.

Finally, to complete the Bastion, the evanescent and interesting photographs of the Serb Sonja Žugić with an unmistakable title Dissappearing. A series of still images made on a Vietnamese beach in 2017 which, according to the author’s intention, want to be the extension of her investigation on the concept of border, both of thought and cultural.

A way of keeping alive the existence of something that is disappearing, in a temporary aesthetic, to remind us that not even the most beautiful and majestic places in the world are eternal. The punctum, Barthes would say, in which the emotions of these places sting us by existing only in the moment of the shot. It is a delicate wonder that portends an apparent calm before its sinking.

At the Lazzaretto di Verona – a beautiful ruin used first as a place of sanitary confinement from the plague of 1630 and then as a depot of explosives until the Second World War – the winning photographs of emerging talents from the #OFF circuit of the Grenze Festival.

With the curatorship of Sara Pellizzer, photographer and student in the History of Arts and Lisangela Perigozzo, photographer and Art Historian, they have been selected and exhibited seven photographic projects. Who are the winners?

False flag of the Polish Jadwiga Janowska. It is the documentation that brings to the stage the history of the Gliwice radio station, known as the “Eiffel Tower of Gliwice” in the region of Silesia (Southern Poland). From Nazi sabotage to a subjective vision shared in recent times, the author interprets this tower from various perspectives.

0 “5 of the Italian Chiara Zuanazzi. Images that portray an environment and a deformed, veiled reality that open the way to an unprecedented, sometimes deceptive, imaginary landscape.

The wind will take us away of the Iranian Nahid Rezashateri. It is the visual celebration of truly lived memories, in the deep roots of the heart: “The Yellow Flowers” ​​(Gol-e-zard). The intensity of a real and sometimes distant past for the author.

Cowland from Stefano Zancan. The unreal imaginaries of the photographer are actually sinuous geometric shapes that come from the bodies of cows. A tribute to the cattle herds that characterize the landscapes of Alta Lessinia.

The time when we knew nothing about each other from Chiara Bruni. “What remains in the memory of someone just passing through our life?”: This is the question represented by the author in poetic Portuguese visions inspired by the homonymous work by Peter Handke (2019).

Ràmici of Veronese Silvia Barp. Vegetable branches that want to signify a deceptive or unprecedented perception of one’s inner being when the outside is what is seen immediately. In search of an identity in who we are, conditioned as we are, by the seasons of life.

Contact of the Apulian Alessandro De Leo. It is a series of portraits that overlap each other producing the actor-author combination. Two identities or a single creature, which in the author’s intention, do not want to determine something definite.

Grenze 2022: what to see at the Verona photography festival