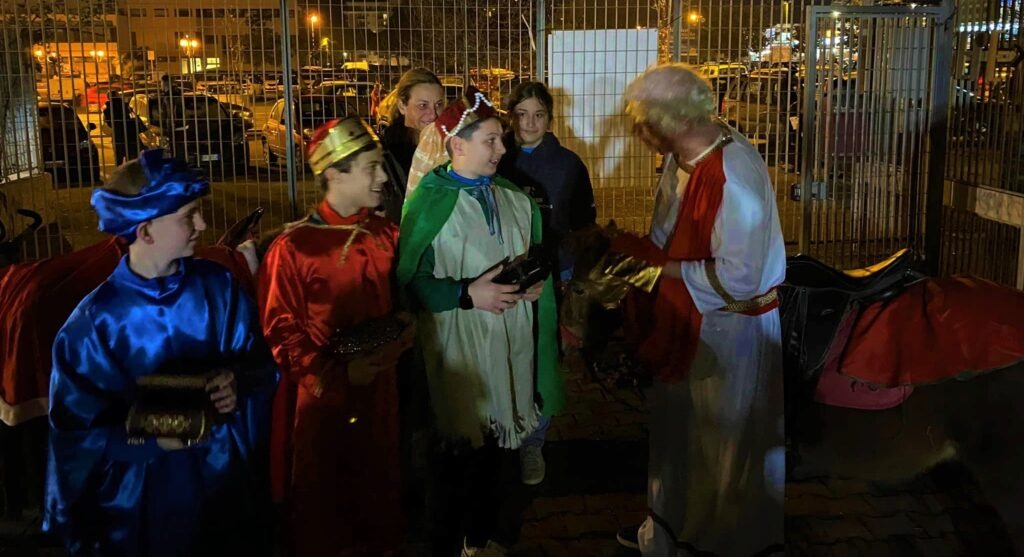 At the culmination of a series of Christmas initiatives, organized with great commitment by pupils, teachers and parents and with charitable purposes, including markets and primary school celebrations, the magic of that distant night when St. Greccio the birth of Jesus was repeated for the second time at the “Melone” and the success was overwhelming, in the true sense of the term. Already an hour before the scheduled opening, the external entrance hall of the School was crowded with visitors eager to enter.

There was no lack of appreciation for the success of the event, of great impact, and many guests who were able to appreciate the care and attention to detail with which the various “paintings” were composed and with which the boys were dressed . All descended into their own parts, from the censor for the census, to the centurions, the artists, the knitters, the bakers, the miller, the washerwomen, the fruit sellers, the innkeepers, the potters, the blacksmiths, the fishermen, the basket makers, the carpenters, the water vendors, the shepherds and the little angels up to the hut of the Nativity with the Holy Family, wrapped in snow and fog, obtained thanks to special effects. To make everything more magical, the singing performances of the children who, in chorus, brought their joy in front of the manger.

To welcome everyone, among the guests of honour, Don Alberto Mazzola, who brought greetings from His Excellency the Bishop and read a beautiful prayer of St. John Paul II, the commissioner Margherita Frappa, who brought greetings from the Mayor, and many friends of the “Melone” including actors, municipal councilors, delegates, journalists as well as enthusiastic parents, family members, teachers and retired colleagues, there were even Ottaviano Augusto and his daughter Giulia himself, who came to check the progress of the census .

Everything was possible thanks to the preparatory work by the teachers, in particular the indefatigable professor Stefania Pascucci, their spouses and parents of good will who took care of the luxuriant plants and made the classroom usable green “Aldo Piersanti”, making it safe for the arrival of hundreds of people.

Everyone marveled at the accuracy with which the Living Nativity was made, in the location of the Green Hall, recalling little Bethlehem with some symbols, such as the palm tree, water and bread.

The palm represents the image of the Tree of Life, a mysterious plant that God had created in the Garden of Eden, next to the tree of the knowledge of good and evil. It was considered the tree of peace, abundance and victory, typical of the Middle Eastern cultural area.

Water, an essential element that evokes the origin of every source of life, dispenser of life and sustenance, quenches thirst and gives life, is used to wash and refresh and is purifying. But it can also destroy and create chaos… It is the origin of all living beings on earth.

Bread, which satisfies and gives energy, is a sign of hospitality and sharing to remind us that we are all brothers, we are all equal, without distinction of gender, age, color, intelligence or anything else.

The visitors of the Nativity scene admired the composure of all the figures, in a representation with theatrical traits and with a strong involvement and from many quarters they were asked to reply as soon as possible but the appointment is for next Christmas, with further extensions and novelties to make our Nativity scene bigger, more evocative and more welcoming.

As if by magic, i tableaux vivants, set up this year, have managed to give life to a representation in which the atmosphere of an ancient village, animated by humble, simple and industrious people was, right from the start, suggestive, warm and welcoming. There was an air of intensity, at times of spirituality (in the broadest sense of the term) and of tradition, thanks to the representation of ancient crafts which have now disappeared in some cases. In the beautiful and intricate natural setting of the Aula verde, which beautifully rendered the landscape full of winding paths, typical of the Neapolitan Nativity scene, it really seemed like going back in time.

The presence of our four-legged friends is certainly effective, a delightful attraction of our living Nativity scene, which inspired so much curiosity and sweetness especially in children and teenagers: two little sheep, intent on eating, hidden in the grass, a lovable rabbit, a nice little donkey and two docile ponies who again this year invariably led the Magi before the moving Nativity.

Another source of attraction, the “Taverna Melone” where some tasty delicacies were feverishly prepared by skilled hands that attracted bystanders with their inviting scent.

We thank the teachers and masterchefs Lina Martello, Rita Barboni, Pina Ruggiero and Mr. Giampiero Serio, husband of the ins. De Biasio, in charge of the barbecue and the tasty roasted chestnuts donated by Prof. D’Aurea; thanks to the parents and/or husbands of the teachers who gave their utmost effort in preparing the food: Francesco Angeletti, Simona Di Cocco, Maurizio D’Amici, Antonio Sprovieri, Giorgia and Mario Voci. A special thanks goes to Mr. Domenico Papagno for generously donating sandwiches and sausages, put up for sale to raise money for the school’s Solidarity Fund! Thanks also to Luca Papagno for transporting the barbecue made available by the ins. Anna Maria De Biasio. Thanks to Ms Elisabetta Di Stefano and to Ms Carla Gnazi, mother of Prof. Proietti, for preparing the excellent mulled wine!

Sharing, collaboration and many emotions! These are the elements that characterized not only the representation of the living Nativity scene but also all the various preparatory moments, the preparations and the hard work done to try to convey, at least in part, the sense of wonder, joy and fraternity that characterizes the night Christmas.

From the week preceding the performance, copious rain permitting, work began on giving the right lighting to the various scenes, thanks to the tireless commitment of Messrs. Enza Di Maccio and Luca Romano; without their contribution it probably would not have been possible to realize what we had conceived.

Thanks to Messrs. Mirko Ferri, Leonardo Isopi, Maurizio Piergiovanni, Tamara Pellegrini, Giampiero Serio, Mario Voci who, together with the teachers Barboni, De Biasio, Martello and Pascucci, worked for the preparations in the Aula verde, for the pruning operation, for the creation of backdrops, settings and the enclosure of the sheep.

Thanks to the parents of the section. It is childhood that set up the potter’s picture with such care: the ladies Anna Pisacane, Corina Amodeo and Claudia Obramovici.

Thanks to Mrs. Valentina Palombini, mother of the primary 3D class, for the beautiful creation of the picture of the baker and the realistic well, as well as for her active participation as a figure.

Thanks to the parents of the 4B primary class who conceived and created the lively and fervent picture of the Carpenter: Moira D’Avanzo, Alessia Di Stefano, Edoardo Donati, Alessandro Salerno, Bruno Zacchei.

Thanks again to the precious Maurizio Piergiovanni who set up and then interpreted the picture of the Census!

Thanks to the mothers of secondary class 3A for setting up the fruit sellers’ counter where a pumpkin from the home garden made a fine show.

Thanks to the ins. Lucia Gonfaloni, Prof. Iannotta and Prof. Maggi for having made available some old family objects, useful for recreating various scenes of ancient crafts; thanks to Prof. Mastroianni for having contributed a palette and easel to the artist’s workshop.

Thanks to Prof. Vigorita for having helped the “knitters” in class to learn how to knit.

Thanks to the ins. Claudia Falanga, Filomena Fanigliuolo and Elisabetta Quarino for having set up a market stall for the Solidarity Fund in the “Taverna Melone” area.

Thanks to the Sbergami families for the blacksmith’s painting props and for providing the hay bales that completed the cabin scenery.

Thanks to Mrs. Cianciaruso for enriching the picture of the basket maker with some baskets.

Thanks to Mrs. Angela Chiné, one of our ex-mothers from “Melone”, who also provided her precious support for this initiative of our school!

Thanks again to the tireless Ms. Tamara Pellegrini, actively involved in the management of the “money changer” as well as a helper!

Thanks to Alessandra Fattoruso for not missing her help and for organizing the Christmas flashmob with the adults of the Gospel Choir of the Tamà association.

Thanks to the ins. Mariella Boccia and Lucrezia Palmitessa for having wanted to participate in the event with the “Gospel choir and … not only” of the children of primary 1A and 5A classes.

Thanks to the ins. Elena D’Elia for directing the children’s choir of the 3C-4D and 5E primary classes together with the city choir of Ladispoli directed by Viviana Loriga. Thanks to Maria Cristina Piergiovanni for the computer technical support.

Thanks to photographer Sergio Battista for the beautiful shots that were able to capture details and immortalize scenes and characters during the performance of the living Nativity.

Thanks to the pupil Marco Sambucini who wanted to let his docile bunny participate in the event!

Thanks again goes to Mr. Mirko Ferri who managed to get two of Mr.’s sweetest sheep to participate in the Nativity scene. Giulio, a friend of his shepherd!

Many thanks to Mrs. Dora Lazzarotto, owner of the ASD Ladispoli Equitazione, for the magical and docile ponies which, also this year, led the Magi to bring gifts to the Child Jesus!

Thanks to mr. Tony Scarf for helping us find more bales of hay for the scenography of the Hut and for the surprise of having a nice little donkey arrive that made its appearance thanks to Edoardo and Pasquale Martino of the “Zoo Grunwald – animals for the cinema”!

Thanks to the ceramist, Mrs. Simona Conte who, despite the professional commitments of the Christmas period, was able to find the way and the time to make her creativity available, free of charge, in the framework of the potter, teaching the children the first rudiments of art!

A heartfelt thanks to all the parents who made themselves available and in the game!

Thanks to all the numerous and curious visitors who came to make our living Nativity scene even more fervent with their affectionate presence.

Thanks to the personalities who came to visit us, Don Alberto Mazzola, Councilor Margherita Frappa and the Art Delegate Dr. Felicia Caggianelli, together with the Managing Director of “L’Ortica”, the journalist Gianni Palmieri.

But above all, heartfelt thanks to our magnificent extras who gave life to a very touching representation: the children, the youngest of the school, from sections D and E childhood, to children from primary classes 3C, 3D, 4B and 4D, the boys of secondary classes 1A-2A-3A-2B-2E and 2G.

See you next edition!!!