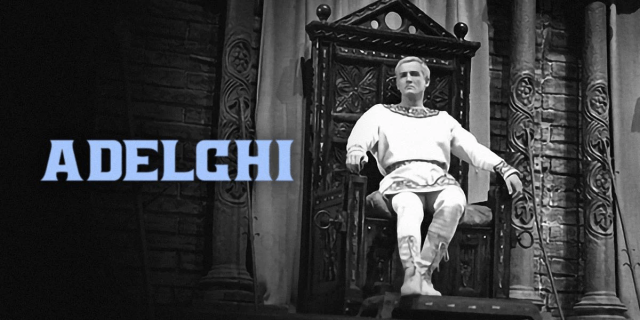 The staging of the Manzonian tragedy of 1822, with which Vittorio Gassman inaugurated the traveling shows of his “Teatro Popolare Italiano” in 1960, was broadcast on television on March 3, 1961. The courage of the actor and director in facing one of the operas more difficult than Alessandro Manzoni, the story of the Lombard prince who tried in vain to oppose the war against the Franks, was rewarded at the time by a great success with the public. For the music Gassman relied on both pieces by Verdi and original compositions by Fiorenzo Carpi, while the television coverage is directed by Carla Ragionieri.

Adelchi it’s a tragedy written by Alessandro Manzonipublished for the first time in 1822. It tells the story of Adelchison of the last king of the Lombards, Wishwhich take place between 772 and the 774year of the fall of Lombard kingdom by Charlemagne (also protagonist of the tragedy).

Manzoni began to write theAdelchi on November 4th 1820in the period in which Vincenzo Ferrario was printing The Count of Carmagnola. The new tragedy ended a year later, on September 21st 1821, excluding the two choirs, shortly after. In October 1822 the work was published for the types of Ferrario.

For reasons of state Ermengardadaughter of the king of the Lombards Wish, is repudiated as a bride by Charlemagne. To take revenge, Desiderio wants the Pope to crown the sons of Charlemagne (already deceased brother of Charlemagne) who took refuge with him on the death of their father. Charlemagne sends an ultimatum to Desiderio, who he refuses and declares war on him.
Thanks to the betrayal of the Lombard dukes Charlemagne’s army advances towards Pavia. Ermengarda, who had taken refuge with her sister Ansberga (Anselperga) in monastery of San Salvatore to Brescia, becomes aware of the new marriage of Charlemagne and, in the grip of delirium, dies. Again thanks to the help of traitors, Charlemagne manages to conquer Pavia and makes Desiderio a prisoner.

Adelchi, who had previously tried in vain to oppose the war against the Franks, he will then fight to the death. Conducted at the end of his life in the presence of Charles and his imprisoned father, he invokes, before dying, clemency for his father and consoles him for having lost the throne: having no more power in fact will no longer oblige him “to do wrong or suffer it” .

Adelchi is a Manzoni tragedy that stages the fall of the Lombard kingdom in Italy by the Franks in the eighth century. The profound meaning of the figure of Adelchi and his dialogue with his father is important and at the same time innovative: it reflects on the fact that they too, before being defeated by Charles and the Franks, had had to impose themselves on other populations: in poor words reflects on the cyclical nature of the story, and from this it follows an improvement on the moral level of the character. In this work Manzoni begins to develop the theme of Divine Providence which will then be the thematic fulcrum of The betrothed.

Here the story is contemplated through the inner drama of the protagonists, sublimated into a religious vision of life. Adelchi and Ermengarda are spirits rich in contrasts between ideals and feelings (peace and glory for the former, the still living love of the husband for the latter). In Manzoni’s tragedies we encounter two categories of characters. The former have a concrete sense of reality and are capable of acting, remaining insensitive to the voices of the heart, while the latter live for lofty and noble ideals, understand the anguish and suffering of others and find only in death the full realization of their complex and troubled personality. The two series of characters represent the two spiritual needs that Manzoni has not yet managed to reconcile. The superior validity of ideals in relation to selfishness and, at the same time, the inability to realize them. In the writer remained some residue of Jansenism: Adelchi, before dying, will say that on earth “all that remains is to do wrong or suffer it”. This is the typical Jansenistic pessimism, to which a providential conception of pain can be opposed (suffering is a gift from God as it proves that no evil has been done). The real overcoming will come when he arrives at an active and heroic Christianity, showing that good can be done even amidst pain and sacrifice.[1]

Luigi Russo[2] speaks of a “widespread tenderness elegiac throughout the tragedy “,” the most acute moment of theological Jansenism, which will disappear in the novel, where moral Jansenism, a rigorous attitude and satirical of confessor of souls “. The critic adds that this tragedy is traversed ”by this tender, ineffable, pathetic feeling of Grace; of that Grace that is granted not to everyone, but only to a few privileged ones ”.

Grande Teatro on TV on 5 September on Rai 5: “Adelchi” by Manzoni