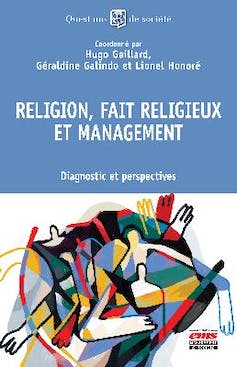 “Religion, religious fact and management”, coordinated by Hugo Gaillard, Géraldine Galindo and Lionel Honoré at EMS editions, brings together both major interviews and academic contributions, around the place and ways of considering religion in the professional sphere. . It is aimed at curious readers who wish to sharpen their thinking on a subject at the very heart of society, which has become an object of management.

The book gives a good place to contextualization, in particular to the historical link between business and religion or even between work and religion. It also addresses operational issues such as the self-presentation strategies of veiled Muslim women, the role tensions experienced by line managers, and how organizations can respond to them through training. International comparison is also on the menu, in public hospitals in the United Kingdom, Quebec, and France.

The good sheets that we offer you testify to this.

In this great interview, Lionel Honoré questions Pierre-Yves Gomez, professor at EM Lyon, on what the religious fact says about the evolution of management, business and work. Extract.

Lionel Honore: According to you, the studies on religious facts in business echo our particular way of conceiving religion in society and in particular of making room for the Muslim religion?

Pierre-Yves Gomez: I mean more broadly that what is said about the religious fact enlightens us as much about it as about the way in which society considers the religious fact. When it does not speak of it or it does not observe it, it is because the religious affiliation of individuals is not a question, either because it permeates all of society, or because it is accepted without problem as one reference among others to motivate behavior. The new interest in the religious fact reveals by contrast the embarrassments or concerns of our society to define itself as such, according to its capacity to recognize and integrate religious affiliation as a possible and legitimate register to legitimize action. of citizens brought together in communities of beliefs. In France in particular, from the 2000s, the growing tension on the religious phenomenon, and particularly on Islam, brought to light a parallel difficulty in defining the scope and content of the so-called “republican” civil society and in giving meaning to these words.

Lionel Honore: Relations between religions and organizations are old. Some current management tools and doctrines are religiously inspired or have religious origins. How is this a new phenomenon with regard to history, including the history of companies?

Pierre-Yves Gomez: Born in the West, companies did not come out of nothing, they inherited a culture, representations and an anthropology rooted in Europe and America in the Christian milieu. Similarly, Japanese companies benefit from traditions and values ​​from the Shinto context and Indian companies from Hinduism, etc. So the relationship between businesses and religions is not problematic by nature, because it would be absurd to imagine a tightness between the spheres of social life, whether they are those of work, common rituals and religious beliefs. Moreover, religions have explicitly influenced many entrepreneurial practices.

This is the case in the West, of the Churches or the circles of Christian leaders who were at the origin of family allowances at the beginning of the 20th century.e century, corporate social responsibility in the 1950s and, if we go back further in time, the principle of subsidiarity, double-entry bookkeeping or the notion of legal person. In the same way, in India, the Middle East or elsewhere, we will no doubt find works directly inspired by actors and religious bodies. This is why the contemporary tension on religion on the part of certain observers speaks to us less of the religious phenomenon in itself than of the difficulties of grasping it today, in our society without religious culture”.

In the rest of the interview, the increase in references to religious principles in the context of work, the need for spirituality and the different forms of spirituality that irrigate work or the conventional nature of secularism are discussed…

Excerpt #2. The (non-)disclosure of the veil in a job interview, by Sarra Chenigle

In this text, Sarra Chenigle, doctoral student in management science, Paris-Est Créteil Val-de-Marne University (UPEC), highlights the organizational and intrapersonal factors that lead to disclosing or not, in a sudden or chosen way, the port headscarf during a job interview. Extract.

Customer contact is the first organizational factor leading to an imposed non-disclosure during the job interview. Although in the private sector, the religious neutrality of employees is not required and every employee has the right to express his religion at work, in certain specific cases, this freedom is limited, in particular when the company’s internal regulations stipulate of a neutrality clause, here, due to customer contact. The hijabi, aware of this requirement of neutrality, will apply the regulations.

“When I was recruited, I knew it was a customer-facing job. I had a team leader position. I worked in front of the customers so it was impossible for me to put on the hijab. It was written in the internal regulations of the company. I didn’t want to talk about the hijab at the job interview to get the job. (team manager, 22 years old)

the dress code is the second factor. It corresponds to all the dress codes imposed by the company on some or all employees and is included in the internal regulations. The hijab who know this rule will not show up with the hijab the day of the interview:

“I didn’t show up with my veil for an interview and I didn’t talk about it because it’s in the company’s dress code. It was impossible to work with, I knew that. The company provided specific clothing, it was also in the rules of procedure. (saleswoman in the luxury sector, 25 years old)

The third organizational factor depends on the sector of activity. More specifically, it concerns the public sector where neutrality is mandatory and concealment (of the veil) required. Applying for public service requires the removal of any visible religious sign from the outset.


Like the two previous factors, the organizational posture in this type of situation refers to a posture of separation where a boundary is created between private life and professional life. Conscious of this rule, hijab apply it:

“I took off my veil during the job interview because it was in the public service. I said to myself ‘if I come with the veil, they will not accept my application, I know that we have no right to work with it. (school canteen worker, 44 years old)

In his text, Jean-Christophe Volia, researcher at the Catholic University of the West, studies the case of a large French telecommunications organization in which he conducted intervention research, and dwells on the design of training to reduce role conflicts managers in the face of religion. Extract.

With regard to inter-issuer conflicts, ie when a person perceives inconsistencies, the incompatibility between the expectations expressed by two or more people, several points are considered.

Sharing experience: immersion should bring out highly complex anecdotes for managers. This is to encourage a sharing of experience between managers on the dialogue with the team in the situations mentioned (possible arguments, change of scenery). In this sense, insisting on the need to make a collective decision with the local human resources manager (HRR) seems appropriate to constitute a transmitter of role perceived as strong with regard to employees.

Read more: Religious fact in business: “the invisible hand” of the middle manager


Disruptive information: whether it is a clarification around the concept of secularism and its implications on the wearing of signs in business, a reminder of the potential criteria for restricting the defender of rights and legal risks incurred in case of discrimination, or even a reaffirmation of the company’s posture in terms of recruitment […], these elements are considered in order to provide the manager with a complete overview of the existing legal benchmarks, likely to guide his decision-making. The information provided frequently goes against the beliefs and wishes of managers.

In this chapter, the international comparison carried out by a team of researchers brings to light original and local practices, which give relief to the question of religious expression at work. Here, we offer an excerpt that evokes the self-regulation practices of collectives in a hospital in the United Kingdom.

Hospital employees, to achieve compatible states of religious and professional identities, arrange among themselves. They prefer not to appeal to the local hierarchy or the human resources department. Instead, they self-regulate. For example, depending on the denominations, they exchange annual leave:

“I think I’ve seen a few examples of vacation swapping over the Christmas period. People from a particular background who say they can’t work on Christmas Eve or Christmas Day, but in exchange they can replace me on another day… I have quite a few examples in mind where people came together for this reason…” (manager, Muslim)

In order to solve the planning problems that could be linked to religious holidays, the caregivers adjust informally by exchanging the days worked according to their faith. Some Muslim doctors do not hesitate to share their prayer needs by being open and proactive:

“I became more open with people. For example, if I’m going to a conference, I’m much more explicit now that I want a quiet space. Because I feel like I have to give people the opportunity to plan this, to see the best in these people[…], I think we need to break the silence and the isolation. (doctor, Muslim)

The self-regulation practices of the collectives are also accompanied for certain employees by an anticipation of the risks of revealing their religious identity. This can translate into a drop in commitment and motivation, but also a fear of being stigmatized and of not being perceived as a ‘good professional’”.

By bringing together a large community of experts, this book is one more step towards a peaceful and contextualized regulation of this contemporary phenomenon. It allows any curious person to gradually enter the subject, and allows practitioners to acquire the fundamental practical and theoretical benchmarks to manage this phenomenon. Good reading !