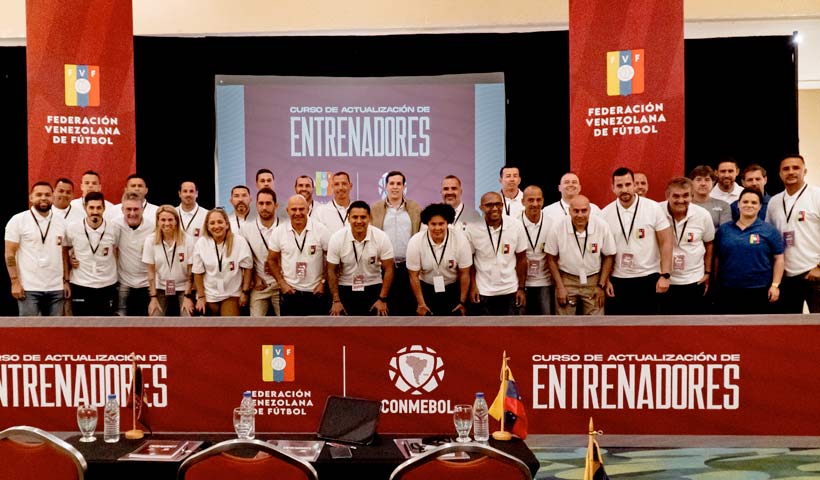 This Monday, the first part of the Coaches Update Course was held in Caracas, organized by the Development Department of the Venezuelan Football Federation (FVF) and the South American Football Confederation (CONMEBOL).

“It fills me a lot to start the year this way because it means that football doesn’t stop working. I’m glad to have you here. Since 2012 there has not been a course for pro coaches in Venezuela. Today they have a federation that supports them”, indicated Giménez, to welcome the coaches present.

The president of the FVF, Jorge Giménez, highlighted “From day one that we started this project, we did not want to leave any of the actors who make life in football. You are a fundamental piece. They are the trainers of the boys and girls whose dream is to dress the Vinotinto”.

We continue with the preparation! ⚽📚🇻🇪

With the presence of the president of the FVF, Jorge Giménez (@jandresgimenez), the second stage of the PRO licensed Trainers Update Course started @CONMEBOL. pic.twitter.com/zdsbbHmKwU

Although this first stage of the course was intended for professionals who make life in teams of the first division of the FUTVE League and the FUTVE Women’s League, both head coaches and assistants, the FVF thinks about the future of national football, he added.

The activities were developed in two phases, a theoretical one and a practical session, where the CONMEBOL instructors evaluated them: George Biehl, Rocío Yáñez and Luis Rodríguez, all of Chilean origin.

It should be noted that the first four days were dedicated to the regularization of the A license for teams from the FUTVE League and the FUTVE Women’s League of the first division and, between Tuesday 17 and Thursday 19 January, the theoretical and practices of those coaches who will update the PRO CONMEBOL.

Likewise, he offered all the support of the federative entity and asked for “commitment and dedication.” Don’t stay here anymore. This is the first step that we are taking from the federation. Thanks to the instructors that CONMEBOL sent us, who have not abandoned us at any time and we have a very solid relationship”.

The FVF Development Department, together with the federal entity, has extensive planning that covers the rest of the national licenses and that will be announced soon, seeking not only the growth and training of those who are within professional football, but also those that begin to grow in all modalities, including futsal or beach soccer. Without forgetting the courses for archers and physical trainers.

Giménez assured that it is a long process and that, despite the fact that the goal is to reach the World Cup, the road is very wide. “Everyone’s dream is to reach a Senior World Cup and we are going to work tirelessly for that, but in this process there are many things to do and you (coaches) are a fundamental piece for this,” he said.