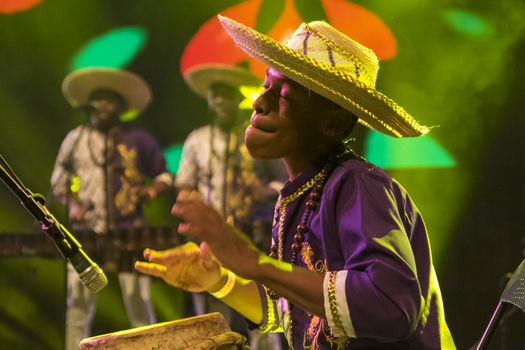 The afternoon arrived full of energy and Afro flavor with the showscasing of musicians from the Pacific.

Medellin became the focus of various musical events. This November 3, when the House Spotify Medal, another space was opened where the music made the stages vibrate.

were the Confama Theater and the mythical Pablo Tobón Theater Uribe the stages that hosted the 2 thousand business appointments and the 40 musical presentations with more than 200 artists, who sang to an enthusiastic, large and diverse audience.

“I feel warm. I feel that it has been a warm, loving, respectful, cooperative and collaborative reunion space. I feel that after everything we have lived as humanity we have the need to meet. I’m happy,” he said. Paula Neder, one of the invited artists from Argentina.

Music was always the protagonist. From the conversations that were focused on “Copyright”, passing through the presentations promoted by emerging groups from Ibero-America, to business meetings between musicians, producers, programmers, record companies, distributors and others.

Day 1: Sounds of the Pacific

The doors of the Pablo Tobón theater opened at 9am. Conversations began with artists such as Yuri Bonaventure and experts, such as Laura Marín (Spotify), who had “copyright” as their central axis. So the morning passed

The afternoon arrived full of energy and Afro flavor with the shows case of Pacific musicians. They opened the traditional groups Semblanzas del Río Guapi, then Ruca and Quinde de Barbacoas, and closed Monkey. They gave way to urban artists such as Verito Asprilla and Zoo Music, MA Studio, Bejuco, Afrolegends and the night was closed by the alternative rock group, Superlitio.

It was a space created by Pacific Discs, Music, Roots and Future, that transported the Pablo Tobón stage to that Colombian region. This is how that night ended, which put the diverse public that welcomed visitors from various parts of the world to enjoy.

The conversations continued that day together with the networking which led to the space for characters with different roles within the music industry to meet, such as producer artists, programmers, record companies, among others. In the afternoon came the music that started at the Confama Theater and closed at the Pablo Tobon.

It was a day full of music from different parts of Latin America. Some of them were Manu Sija from Argentina, Pahua from Mexico, Hit la rosa from Peru and as a local, Mateo, who defines his genre as “Afro-Latin Pop Rock” and recounted his experience at the event.

“Being in Circulart has been a very nice opportunity, it has been meeting my roots and where I come from. She has been gratifying because the muisca that we make in Canada is not really understood because the image of Latinos is very homogenized. Arriving in Medellin with the talent and level that exists here is a different appreciation of the music we bring.”

In the morning, space was opened for the “business roundtable” that had been designed Circulart for all the musical actors to meet. The afternoon was opened by the Confama theater with a Latin musical show, with guest artists from Puerto Rico, Argentina, Ecuador and other countries.

“I find it interesting that they have brought together so many currents of Latin American music in one place. We come from the Andean part and we are always looking for the sounds of the Ecuador can meet and share with artists from other parts of Latin America”, LaTorre, guest artist from Ecuador.

The day closed at the Pablo Tobón Theater with a Spanish night where there were artists like David Minguillón, Pablo Lesuit, Chiki Lora and Mar Vilaseca. They alternated with two local artists who captured all the Colombian flavor: Los Cumbia Stars and Chalupa Travel.

The Pablo Tobon Theater was in charge of closing the event, which began with the “business roundtable”, continued with the networking led by El PAUER, Discos Fuentes and the same Circulat. And it closed with a musical night of mostly Colombian sounds, including Alejo García and the Aicardi Brothers.

The director of the event, Octavio Arbeláez, announced his thanks, the farewell words and referred to Circulart 2023: “An edition is already being planned that will include the performing arts as a great novelty. That will be an important contribution Circulart and in its relationship with MAPAS (The Performing Arts Market of the South Atlantic)”.

Four days of Circulart, a platform for emerging musicians