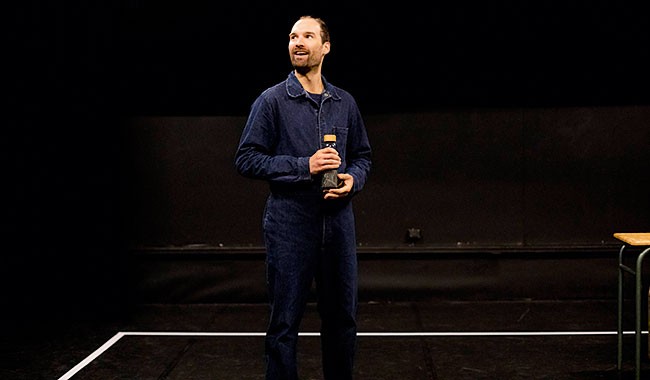 I bathed all my childhood in art and faith. It was really our daily bread at home; I am the last of a family of four. We regularly went to the opera, the theater or the cinema. On each of our trips, we visited museums and churches.

And, in the car, we listened to the meditations of Father Paul Baudiquey on the works of Rembrandt, the return of the prodigal son in particular, a true icon in our family. “The only looks of love are those who hope for us”, he said. Strong word! She is quoted at the end of the contemporary adaptation of the parable that my friend Amarú Cazenave made in 2014, and in which Michael Lonsdale played the father, and I played the son. Like what, everything, in my childhood, was already in germ.

The origins of a vocation

My first artistic and spiritual shock occurred in the chapel of the Sorbonne, in Paris. I was 12 years old. Photographs of the Pieta by Michelangelo, by Robert Hupka, were exhibited, and they were sublime. I was dazzled, touched to the core. This experience shaped my outlook, it opened me up to beauty. She marked me forever, just like the one I was going to live then at 13 years old on the trestles.

I had been doing theater since kindergarten, but that year I was playing the lead role in Italian Straw Hat, by Eugene Labiche. Two hours of show, 300 spectators, five performances: it was not nothing for the kids that we were! But in my three-piece suit, I was like a duck to water. The game was self-evident. A pure happiness.

The appeal of the theater as a profession and a vocation was not, however, so obvious. As a teenager, I dreamed of getting involved in humanitarian work to help my neighbor and live the Gospel. So I headed for studies to work in aid to developing countries. Then my somewhat naive dream of “saving the world” cracked until it exploded in midair during my master’s degree at the Sorbonne. This disillusion caused an inner change of heart. I felt more and more the need to embrace a creative profession and to act locally. The theater then imposed itself as the most obvious, the most natural way.

In the theatre, a sense of the sacred, of the mystery

At the École Supérieure d’Art Dramatique in Paris, I discovered in several of my teachers a sense of the sacred, of mystery, sometimes even a spiritual quest and a thirst for the absolute, for transcendence. They exercised their art and their pedagogy with great nobility and great delicacy, having at heart to elevate bodies and souls. These artist-craftsmen awakened me to a new artistic path made of humility, total gift of self, effort and patience. I can still hear our breathing teacher explain to us that in 10 or 15 years, we will only begin to master our instrument. How not to make the link with the Christian life which, too, is a long-term task, a permanent apprenticeship?

Against all expectations, my theatrical training thus came to nourish and inspire my life as a believer. What my teachers taught me spoke to my Christian heart. There were profound truths in their teachings that I could transfer to my habits as a believer. The art of repetition, for example, which, in the theater, must be a perpetual reinvention of the living. When I recite the Our Father every Sunday at Mass, sometimes mechanically, am I attentive and present to these words which engage my whole being? Do I live in them? What of my body: is it invested when I pray, when I move forward in the communion line?

It would take a body catechesis to learn how to behave physically at Mass. Our liturgies are sacred performances after all! We must take care of its beauty because “the Word became flesh” (John 1:14), and it is therefore through our bodies and our senses that he also comes to meet us. My first renewal in faith is moreover linked to this dimension of incarnation. It was during a mass led by the Saint-Jean community that I had just discovered. At the time of the elevation of the body of Christ, the brothers and sisters all prostrated themselves on the ground, and this gesture struck me. From the height of my 20s, with my rasta style and my dreadlocks, I suddenly regained consciousness of the real presence of God, the Lord before whom every knee must bend.

“I started to put my life in order”

I owe a lot to the movements resulting from the Charismatic Renewal. By attending their gatherings, I gradually realized my inconsistencies. My eyes really opened up before the WYD in Madrid in the summer of 2011. I had gone on a mission to Barcelona with the Anuncio movement. One evening, while we were walking the streets to invite young people to a prayer vigil, we came across a group of French students.

One of them told us: “I’m a Christian too, but I don’t have time: we go to a nightclub. » This guy, it seemed to me that it was me! Until then, I thought that God blessed me whatever I did. But no ! It is not enough to call oneself a Christian and to have a cross around one’s neck. It is necessary to live in coherence with what one wants or claims to profess. I then began to put my life in order to stop spreading myself too thin and to anchor myself more in Christ.

If the daily work of the actor has renewed my religious practice and my relationship to the word of God, I did not immediately want to participate in Christian theatre. My reluctance was all the greater because the initiatives carried out by believers are often synonymous with voluntary work and non-professionalism… This approach seems to me to be counter-productive. In my view, one must first develop one’s talents and skills, seek to excel in one’s discipline, then eventually decide to seize it to transmit a message of faith. It was only after five years of training and several years of work in very varied projects (especially contemporary authors) that I accepted Christian texts. One of the first was the Goldsmith’s Shop, by Karol Wojtyla, in 2014.

The decisive meeting took place with Charles de Foucauld, universal brother, a single on stage created by Francesco Agnello with actor Damien Ricour. When Damien fell ill, and only a few months before his death, he proposed to Francesco that I replace him. I thank him again for entrusting me with this role which transformed me artistically and spiritually. Because I not only learned a lot and progressed as an actor, but I was overwhelmed, returned by Saint Charles de Foucauld.

For the first time in my career, I was both in my artistic place and at the heart of the heart of my life. There was like an alignment. At some point, I wasn’t playing anymore, I was. When, for example, I pronounced his famous prayer of abandonment, I was not reciting a text: I was meditating. I prayed with his words for those present in the hall and in the communion of saints…

To be an actor is to touch all of humanity, without judging it, rather by defending it. It is to seek the other, the glorious as the last of the last. To love him, to know him from the inside, to get under his skin, in his unique journey. This work of incarnation necessarily moves the lines within you. It awakens sometimes buried things, confronts you with yourself, questions you intimately: what would I have done in his place? what did I do ? And isn’t this dark side also in me? Martin Steffens wrote an essay whose title could be the comedian’s motto: Nothing inhuman is foreign to me (Points live). This sentence applies perfectly to the personal project that I have been carrying out for three years, In five hours, only one on stage based on all the prison writings of Jacques Fesch.

Originally, like him, from Saint-Germain-en-Laye, from the same kind of background, I could have been a Jacques Fesch. I could have switched to a huge youthful mistake and committed the irreparable: kill a man after a failed robbery. I knew that Jacques Fesch had encountered Christ in prison and that his prison diary, In five hours I will see Jesus, had had an incredible spiritual fruitfulness. What better way than the theater to dive into the story of this good thief of the XXe century, to feed on it and make it live?

Towards the Jacques Fesch of today
“The goal of my project was clear from the start: to extract Jacques Fesch from the ecclesial circuits to make his passage from darkness to light known to a wide audience. A public which does not enter the churches, but which goes to the theater. From the start too, I had the intuition to give back to the prison what it had germinated, to go towards the Jacques Fesch of today. So it was in prison that I started playing, and I will continue. Prisoners feel honored in their difficulties, and some are touched by the Christian message. “I know now that we are never definitively condemned”, gave me one of them. »
In five hours, piece by Fitzgerald Berthon, Saturdays at 7 p.m. until December 10 at the La Fleche theatre, in Paris (XIe).

The stages of his life
1983 Born in Saint-Germain-en-Laye.
2010 Meeting with the Charismatic Renewal.
2012 Graduated from the Ecole Supérieure d’Art Dramatique in Paris.
2016 First alone on stage, Charles de Foucauld, universal brother, by Francesco Agnello.
2017 While waiting for the barbarians, film by Eugene Green.
2021 Marries Juliet.
2022 In five hours, at the La Fleche theater in Paris.

To read : On the way to beauty. Artists and Christians, they testify, Emmanuel editions, €19.90.

Fitzgerald Berthon: “Being an actor means touching all of humanity”