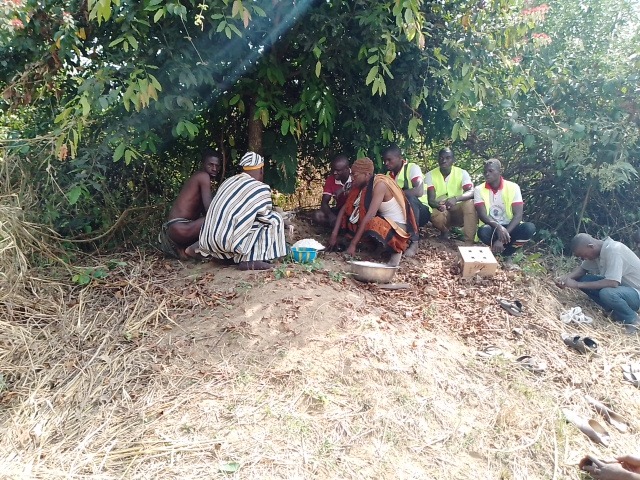 The Sénoufo culture at the service of community development was highlighted once again on the occasion of the 8th edition of the Ponvogo festival or Festi-Ponvogo.

Located in the sub-prefecture of Koni, 15 km from Korhogo in the north of Côte d’Ivoire, the village of Ponvogo has been home to the Festi-Ponvogo for seven years at the initiative of the Tchépé Foundation chaired by Coulibaly Brahima in collaboration with the Mutuelle de développement de Ponvogo. This event takes place within the framework of the strategies of mobilization of the frames and population of the locality around of activities and infrastructure community. On the program, cultural activities, training of young people and women in market gardening, awareness of young girls against menstrual precariousness and distinction.

For the 8th edition of its Sénoufo arts and cultures festival held on December 26, 27 and 28, 2022, more than 10,000 participants from the 15 allied villages of Ponvogo did not shy away from their pleasure. Placed under the theme: “The Culture senufo to Department of development community, The example by Ponvogo», the Festi-Ponvogo has definitively placed Ponvogo as a crossroads for the promotion of the Sénoufo culture.

Introduced at the Ponvogo Festival in 2021, the major innovations, in particular the spiritual dimension, were reinforced in 2022. Thus, worship rituals in the sacred wood and sacred waters, the cult of genies and the Catholic vigil were organized in order to to attract the blessings of the divine for the smooth running of the ceremonies for the first day of the festival. These ecumenical prayers also aim, according to the commissioner general of Festi-Ponvogo, to create cement and cohesion between the different religions.

Leading personalities of culture in the country enhanced the event with their effective presence. Thus, the directors general (Dg) of the National Institute of Arts and Cultural Action (Insaac) and the Palace of Culture of Abidjan Treichville, namely Professor Ouattara Siaka and Koné Dodo and the Chairman of the Board of administration (Pca) of Côte d’Ivoire Energy Yves Konan did not want to be told about this great cultural event.

Actors in the promotion and enhancement of Senoufo culture were honored during a ceremony chaired by the Minister of Culture and Francophonie, Françoise Leguennou-Remarck. These include Minister Koné Dossongui, Koné Dodo, Insaac, Silué Boloba, Alexis Sekongo and his late dad, Dr Coulibaly Yalamoussa, the Minister of Culture and many others. This ceremony was sponsored by Moussa SORO, vice-president of the Tchépé Foundation and Dr Nanguin Coulibaly.

“Overall, we can say that this edition went very well. And we are proud. Our gratitude goes first of all to the Minister of Culture who has shown a certain interest from this edition of the festival of arts and culture of Ponvogo. For the next edition, you have, when you take a qualitative leap, you have to sit down and take a qualitative leap. So we are going to consolidate the achievements and project ourselves. And, we will see what to bring as innovation. Then see what is most appealing and see that it is one of the most viewed cultural festivals in the country”announced Coulibaly Brahima who said he was satisfied with the floods brought to this edition of the Festi-Ponvogo.

The balafon school with the Insaac delegation

Balafon training activity in a mix of modernism and traditional, with the technical and logistical support of a strong Insaac delegation led by Dr Coulibaly Nanguin, Director of Continuing Education. The balafon school sponsored by Prof. Ouattara Siaka, another innovation of edition 7, was one of the attractions of 2022 through the dialogue of cultures through the mixing of modernism and tradition.

The students in training in this Institute stayed in the village and allowed a sharing of experiences with the traditional balafonists of Ponvogo. They were able to discuss the uniqueness of their respective instruments and the need to strengthen their mutual practices for a better practice of the Balafon. To say the least, the delegation of Insaac students drank to this school of sages.

Unicef ​​volunteers at the rendezvous

An awareness day on the use of sanitary pads and the fight against drugs served as a pretext for Mr. Stéphane Ouattara, president of the NGO Bénévoles du Monde Côte d’Ivoire section with the collaboration of volunteers from U-Report of Unicef ​​to sensitize the school youth of Ponvogo.

From making liquid soap to making notebooks, the school youth of Ponvogo were instructed by Alex Kakpo, president of the Abidjan Flamboyant Lions Club and members of his organization. In support of the volunteers, midwife Ouattara Rosalie and medical staff from the Tchépé health center in Ponvogo also educated young girls in the village about menstrual poverty.

As part of food security through the Government’s Social Program Support Project (PA-PSGOUV), the vegetable garden of the WOMIENGNON women’s group in Ponvogo, received on Wednesday, December 28, 2022, the visit of a team from L ‘ANADER. The team from Korhogo regularly assists the brave women of Ponvogo in setting up, managing and monitoring the nurseries.

The objective, according to Coulibaly Justine, technician specializing in annual cultivation at Anader Korhogo, is to transmit the modern rudiments of market gardening to the fairer sex. Gathered in two associations, the women leaders of Ponvogo received numerous agricultural kits for the development of their activities.

Remember that the main objective of the Ponvogo Arts and Cultures Festival is to promote the worship and community values ​​of the Senufo people in their multi-secular diversity.

Festi-Ponvogo 8: the Sénoufo culture at the service of community development

Secret Vosges: experience the unexpected with Remiremont
“Succession”, “The Last of Us”, “Wonderman”…: the 10 most anticipated series for 2023
Ali Shariati, spirituality as a revolutionary tool of liberation
Tweet
Share
Share
Pin