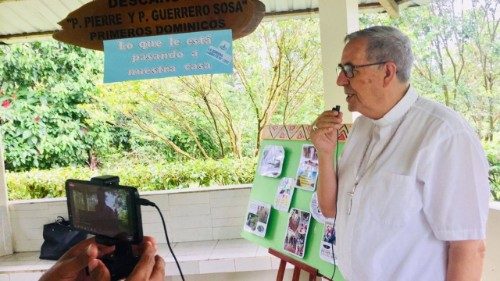 On the eighth anniversary of the founding of REPAM, the Pan-Amazonian Ecclesial Network, its members make present the embodied spirituality that accompanies its birth and its journey promoting the Kingdom of life, in the care of the Amazonian peoples, territories and ecosystems

The Amazon is full of life and daily miracles that God performs in nature. In this great territory is the so-called Amazon basin, which pours its waters into the sea through a single river, the Amazon.

It is a river that does not form by itself, but receives water from various sources: snowmelt, springs, rain, mist, drops, swamps, lakes, puddles, visible and underground streams. Water circulates in it from nine countries – Bolivia, Peru, Ecuador, Colombia, Venezuela, Brazil, Guyana, Suriname and French Guiana – and that exceed its environmental limits, being an important life space for the existence and future of all humanity. .

REPAM is like the Amazon River, which is being formed from the experiences and experiences of many people, communities, parishes, vicariates, prelacies, dioceses, organizations, etc., remembering that “the presence of the Church in the Amazon basin does not it is that of someone with their bags ready to go after having exploited everything within their reach”. Pope Francis stated in Rio de Janeiro, on July 27, 2013:

At the same time, it is not important only in itself, because it must carry these lives and experiences to the construction of the Kingdom of God, knowing that from small drops we will come to constitute and reach the sea. In order for the harmony of REPAM to be maintained, we must all walk and navigate with a deep spirituality: from the authentic incarnation in reality – existential dimension – centered on the written Word and from the theological dimension (written and oral Word of God), with a prophetic-martyrdom attitude and marked by a true identity, that is, his Amazonian face.

Speech by Monsignor Rafael Cob, new president of the Pan-Amazonian Ecclesial Network, REPAM, who officially took office on August 9. The vice presidency is…

This initiative springs from the action of the Holy Spirit who has guided and guides the Church in the process of incarnating the Gospel in the Pan-Amazon. The dynamism of REPAM requires the active participation of each one of the ecclesial instances, be they local organizations or Churches, through the various initiatives, actions, proposals, projects and programs defined by the Network, joining forces, creating bridges of dialogue, cooperation and articulation between all the ecclesial actors present in the region.

The Pan-Amazon is “a source of life in the heart of the Church”, responding to the appeal of the bishops gathered in Aparecida, to “establish among the local Churches of various South American countries, which are in the Amazon basin, a joint pastoral with properties differentiated to create a development model that privileges the poor and serves the common good”.

“The meeting of the waters in the Pan-Amazon must continue its path towards the construction of the Kingdom of God. For this we must all get involved and feel that this is God’s call so that the Amazonian peoples have life in fullness “