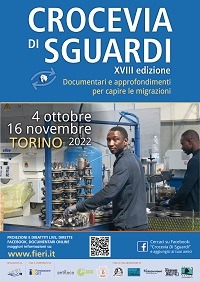 FIERI – INTERNATIONAL AND EUROPEAN FORUM FOR IMMIGRATION RESEARCH – in collaboration with the cultural association ANTILOCO, the Goethe-Institut Turin, Il Piccolo Cinema, the Master in Translation for Cinema, Television and Multimedia Publishing of the Faculty of Languages and Foreign Literature and thanks to the funding of the CRT Foundation, present the eighteenth edition of CROSSROADS OF LOOKSa path of documentaries and insights to know and understand migration.

The curator Pietro Cingolani explains: “In 2022 Europe is facing the consequences of global tragedies, such as the end of the Western presence in Afghanistan and Russia’s aggression against Ukraine. Borders are closed, strategies for the inclusion of immigrants and asylum seekers, a continuous erosion of workers’ rights takes place. We live in an increasingly overheated world, in which climate change is only one of the different dimensions of the crisis at stake. “Overheated connections” is the title of Crocevia di Sguardi, which this year reaches its eighteenth edition, in a mixed format online and in presence. The documentaries in the program highlight links between global forces and local worlds, proposing new ways to cool the destructive interconnections: through a radical ecological turning point, demilitarization, the political leadership of young people and children of migration, the power of art and, in all its expressions. In addition to the presence of scholars, researchers and activists, the meetings with the directors Federico Francioni and Dagmawi Yimer enrich this edition “.

All documentaries will be both presented in the hall and made accessible, upon registration, on the Festivalscope platform. The seminars will be live streaming on the Crocevia di Sguardi Facebook page and on the Fieri YouTube Channel.

THIS RAIN WILL NEVER STOP
by Alina Gorlova, Ukraine / Latvia / Germany / Qatar, 2020, 102 ‘
Due to the war in Syria, the Suleyman family is divided across Europe. Lazgin lives with his family in Ukraine, his brother Koshnhav is in Germany, while a third brother lives in Kurdish Iraq and a fourth still lives in Syria. The documentary follows Lazgin’s son Andriy, who is now a Red Cross volunteer and deals with another military conflict, this time in Ukraine. Andriy’s dilemma is whether to escape the war or help alleviate the suffering on the spot. After the sudden death of his father, Andriy decides to accompany his body to Syria, in an endless cycle of war and peace.
Documentary available online from Tuesday 4th October to Thursday 6th October
Live screening: Thursday 6 October, Cinema Teatro Baretti, 9pm
Introduced and commented by: Massimo Gnone (UNHCR Piedmont) and Olga Diabina (Mosaic Association)

GOLDEN LAND
by Inka Achté, Finland, 2022, 82 ‘
Mustafe Hagi has lived in Finland for 25 years. After the news of the presence of copper and gold in the land of his ancestors in Somaliland, he decides to move with his whole family. Will the family be able to settle in Hargeisa or is he destined to experience a new marginal situation, just like in Finland? Will Mustafe be able to really open a gold mine in an area still traversed by those disputes between clans that led to the civil war? Golden Land helps reflect on the suspended identities of refugees and their concept of home.
Documentary available online from Tuesday 11 October to Thursday 13 October
Thursday 13 October, 5 pm, live on Facebook and YouTube
Luca Ciabarri (University of Milano Statale), Anna Ferro (CeSPI) and Valentina Mutti (University of Milano Statale)
“Return to Africa, between opportunities and risks”
Live screening: Thursday 13 October, Cinema Teatro Baretti, 9pm
Introduces and comments: Suad Omar (Sub-Saharan Women Association of Turin)

MR. BACHMANN AND HIS CLASS
by Maria Speth, Germany, 2021, 217 ‘
Where does it feel at home? In Stadtallendorf, a German city with a complex history of exclusion from foreigners, the brilliant teacher Dieter Bachmann offers his pupils the key to feeling a little more at home. They are aged between twelve and fourteen, and come from twelve different nations; some are not yet familiar with the German language. Close to retirement, Bachmann wishes to inspire these citizens through curiosity about different professions, cultures and opinions.
Thursday 20 October, 5 pm, live on Facebook and YouTube
Mattia Zeba (EURAC) and Marco Romito (University of Milan Bicocca)
“The school of diversity”
Live screening: Thursday 20 October, Cinema Teatro Baretti, 8pm
Introduced by: Roberta Ricucci (University of Turin)
In collaboration with Goethe-Institut Torino

RUE GARIBALDI
by Federico Francioni, Italy, 2021, 72 ‘
Rafik and Ines are twenty years old and have been working since they were ten. They have Tunisian origins, grew up in Sicily and recently lived in the Parisian suburbs. Their existence is a precarious movement between interruptions, changes and humiliations. Inside their home, one is the mirror of the other; here, time stops and the city becomes more distant. When the director arrives, they proudly show him the way home: Rue Garibaldi. A documentary that tells the everyday life of the new emigrations from Italy.
Documentary available online from Tuesday 25 October to Thursday 27 October
Thursday 27 October, 5 pm, Il Piccolo Cinema
Direction and screening workshop with Federico Francioni

RESOURCES
by Hubert Caron-Guay and Serge-Olivier Rondeau, Canada, 2021, 99 ‘
The meat industry is booming in Quebec, where huge factories use standardized production methods. The factories hire asylum seekers, mainly from Latin America, so they can continue to produce at competitive prices. This observation film divides his attention between workers and animals, parallel lives that intersect in factories. Everything that happens is at the service of production optimization. A subtle and critical look emerges on the capitalist world and on the living links in the chain that make it work.
Documentary available online from Monday 31 October to Wednesday 2 November
Wednesday 2 November, 5pm, live on Facebook and YouTube
Marco Omizzolo (Eurispes) and Valeria Piro (University of Bologna)
“Agri-food supply chains and migrant labor”
Live screening: Wednesday 2 November, Cinema Teatro Baretti, 9pm
Introduces and comments: Abderrahmane Amajou (Slow Food)

TAMAADEN
by Seydou Cissé, Mali / Cameroon / South Africa / France / Belgium, 2021, 84 ‘
Bakary, a young man from Mali, sits on a rock and pours milk on his head and body. He takes an egg, looks at it carefully, says “Monday”, after which he breaks it and drops the yolk into the water. Only by following all the marabout’s directions to the letter, he should be successful in the next crossing. Taamaden (“Traveler”) shows us the world of some immigrants from West Africa who make a living in Spain and that of Bakary in Mali, who is preparing for a new departure.
An intimate documentary on the daily life of migrants and their links with transnational spiritual leaders.
Documentary available online from Tuesday 8 to Thursday 10 November
Thursday 10 November, 5 pm, live on Facebook and YouTube
Stefano degli Uberti (CNR-IRPPS) and Yassin Dia (University of Milano Bicocca)
“Spirituality, imaginaries and migrations”
Live screening: Thursday 10 November, Cinema Teatro Baretti, 9pm
Introduces and comments: Ibrahima Poudiougou (Frantz Fanon Center)

BLUE / RED / DEPORT
by Lina Lužytė, Germany, 2022, 82 ‘
Talib Shah Hossaini, a 37-year-old Afghan film director and asylum seeker, lives in Moria on the Greek island of Lesbos. Moria was the largest refugee camp in Europe until it was razed to the ground in the fall of 2020. After a year in the Talib Shah camp, instead of giving in to despair, he decides to turn his suffering into art and realizes a film called PICNIC, in which members of his family and other refugees appear as amateur actors. The documentary tells about Hossaini’s directorial work and the first public screening in Moria. A film that talks about the power of dreams, art as a means of survival, and current immigration policies in Europe.
Documentary available online from Monday 14th to Wednesday 16th November
Wednesday 16 November, 5 pm, live on Facebook and YouTube
Annalisa Frisina (University of Padua) and Dagmawi Yimer (director)
“Art, diaspora and social criticism”
Live screening: Wednesday 16 November, 9pm, Cecchi Point
Introducing and commenting: Murat Cinar (journalist) and Deka Mohamed Osman (visual artist)

CROSSROADS OF GLIMPS 18 – From 4 October in Turin