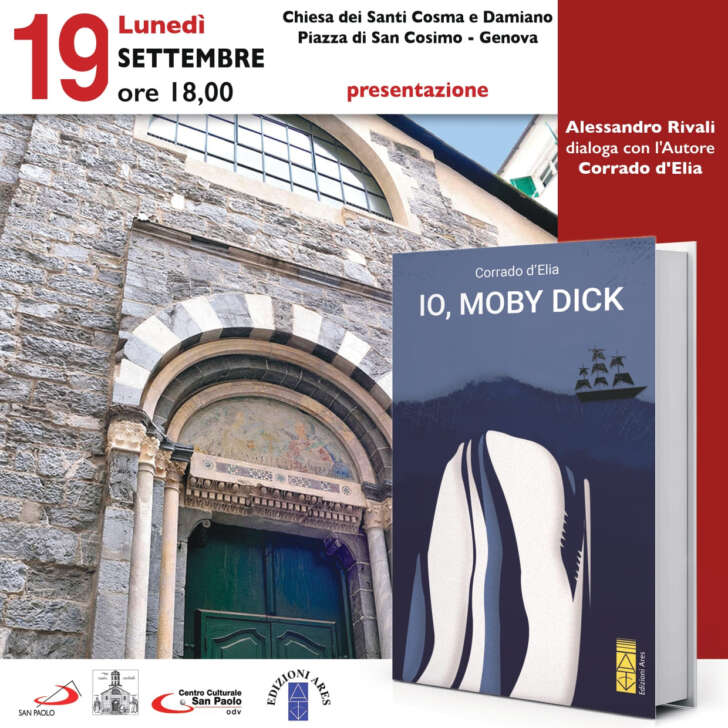 Corrado d’Elia presents his «Io, Moby Dick» on September 19th at 6pm at the church of Santi Cosma e Damiano.

Corrado d’Elia presents his «I, Moby Dick» on Monday.

The poet Alessandro Rivali will speak with the author, Corrado d’Elia

«Reading“ I, Moby Dick ”is an opportunity for a journey into ourselves. To ask ourselves what is truly decisive in our life (Alessandro Rivali)

On Monday 19 September at 6 pm at the church of Santi Cosma e Damiano, I, Moby Dick by Corrado d’Elia will be presented for the first time in Genoa (Ares Editions, “Narratori” series, pp. 160, euro 14).

Theater text, born to be represented, read aloud and told, the work now becomes a book that wants to be food for thought, a tribute to silent, profound reading, of thought, of meditation.

After so many texts written for the theater and never published, Elia, one of the most innovative and complete figures of the contemporary Italian theater scene, feels the need to start the publishing adventure, respectfully on the long wave of a book-world that has always questioned, without limits in space and time, which also knows how to be extraordinarily contemporary.

Cosmos and science, a heritage of myths that are not invented but are revealed, the windy poetic exploration of a theater of the world is Moby Dick for Elia. It is a poem where men gather in front of ultimate questions and the enigma of navigation takes center stage, as a challenge. There is no minimalism to contend with.

There is a powerful subversion of contemporary consciousness. An incandescent, feverish writing, which does not renounce the challenge of spirituality, which in the brevity of the dramaturgical action allows reflections, questions, authentic reflection to flash forth.

The author writes in the introduction:

“Every time we get close to Moby Dick, we have the impression of finding ourselves in front of something bigger than us, important and elusive. This book has the ambition to take us by the hand and lead us on the roads, or perhaps better to say for the great seas, in search of the white whale. A journey that is a metaphor for our own life ».

We read Alessandro Rivali in the invitation to read:

«Me, Moby Dick is the writing of a dream, but also a sign of hope, as writing always is. Reading Me, Moby Dick is an opportunity for a journey into ourselves. To ask ourselves what is truly decisive in our life ».

Each of us, in reading, will be Ahab, with his hardships, intemperances but also and above all with his eternal questions. Questions that are none other than ours, in the face of the manifestations and mysteries of life.

Here is a short video presentation:

Corrado d’Elia is an actor, director, playwright and also the creator and organizer of cultural events and reviews. Milanese by birth, but Ligurian by adoption, he graduated as an actor in Milan at the Paolo Grassi School of Dramatic Art. In 1995 he founded the Theaters Possible project, School, Company, Circuit and Organization of theatrical production and organization. He has been the artistic director of numerous theaters, seasons and theater reviews throughout Italy.

For the TEATRI DEL PONENTE LIGURE project (of which he was co-director) he organized seasons and events in the theaters of Loano, Finale Ligure, Imperia, Bordighera, Cervo, Pieve di Teco, Ventimiglia and San Remo. He is an actor, director and recognized author of numerous shows.

Among the last who have circulated in Liguria, we remember “The invisible city”, “Argonauti, canto per Recco”, “Aiace” by Sophocles, all directed by Sergio Maifredi and the production of Teatro Pubblico Ligure.

His talent is attested by numerous awards. In June 2002 he won the Hystrio Prize – Province of Milan. In September 2007 he was awarded the Franco Enriquez Prize for the Theater.