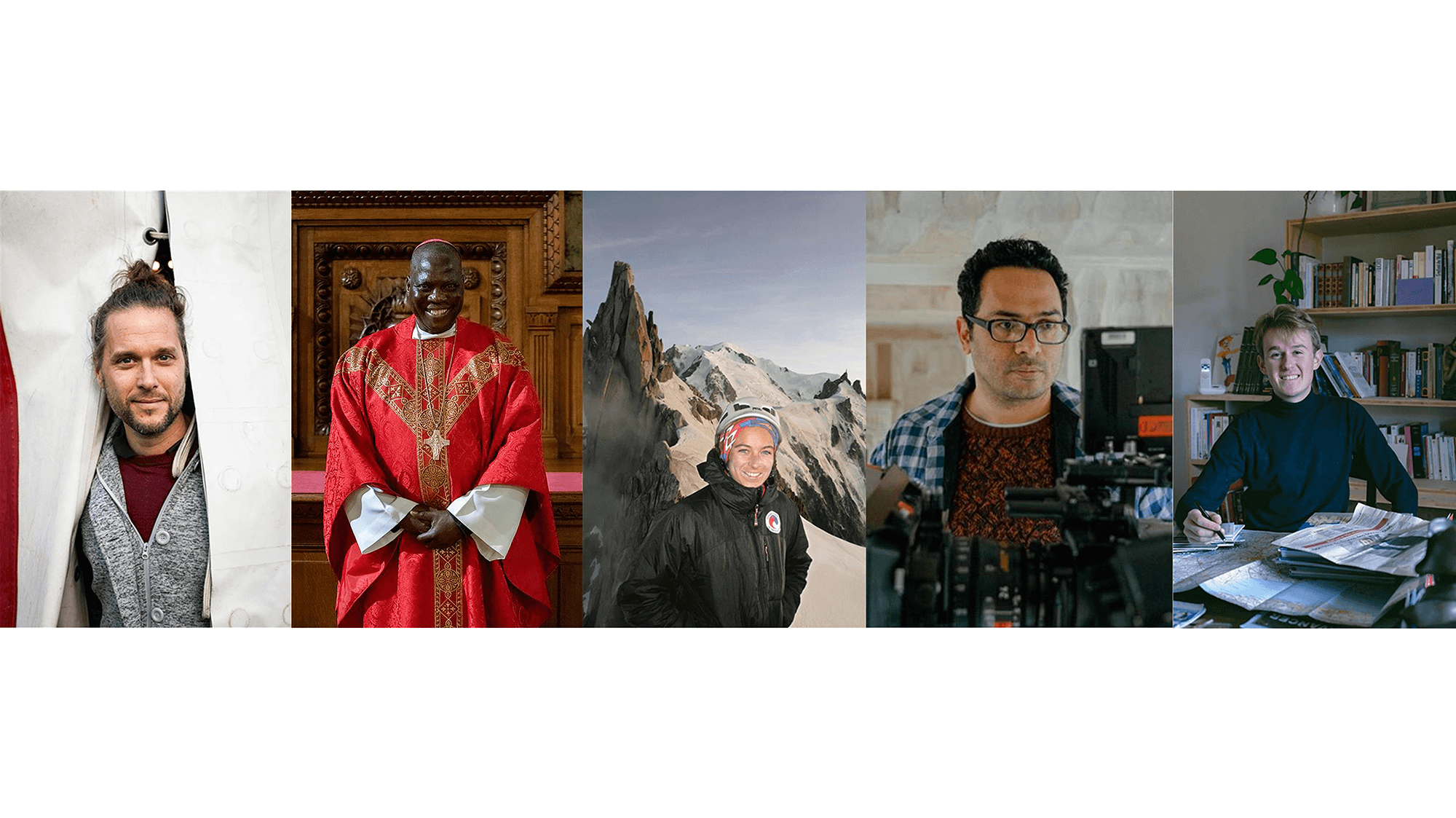 On Christmas night, the good news is the business of the angels first. What do they say? Something fundamentally good is happening in this world! By installing our little plaster and wood nativity scenes, how can we find their meaning? Because this good news springs from what is both the most common and the most extraordinary of the human adventure: the birth of a child. A life always surprising, possible. Marie, gripped by the arrival of her newborn baby, is one of those people who act discreetly but with unfailing perseverance. Joseph, amazed, protects his family by his mere presence. And then there are the shepherds. Without any certainty, they proclaim a mad hope in a world in crisis. Two millennia later, what remains of this conviction? We went to meet the bearers of today’s good news. Those who act to rebuild, reconcile, emancipate, educate. Those who protect, often silently, defend ecosystems and life in all its forms, marveling at the beauty of the world. Those who testify, finally, anxious to tell the daily life differently and to transmit the stories that save. Dominique Lang

For hope. A circus doctor

Combining spectacle and care is the vocation of the Héka circus. In Chinon (Indre-et-Loire), this atypical structure relies on the magic of the marquee for psychological support at all ages

Under the starry marquee, the blond hair of Pauline*, 12, and the cap screwed up to the eyes of Loane, 11, rush about. Carpet, trapeze, ribbon, Chinese plates, the two friends go from one material to another without stopping under the gaze of Johann Elain. Tirelessly, the clinical psychotherapist, who is also a circus artist, gets closer, offers an exercise. Gradually, the two preteens slow down, before taking their places in armchairs arranged in a circle. They agree: “We are here to talk.” Each Wednesday, the Heka circus welcomes young people living in the Children’s and Teenagers’ Village of Chinon (Indre-et-Loire), in the Parilly district, for an atypical discussion group. Soon, it will be the turn of Enzo, Hugo and Esteban to chain somersaults and figures on the diabolo. A valuable mediation when talking about oneself is unknown and the personal story is made up of ruptures. Here, “everything is a pretext for the relational, explains Johann Elain. We live something together, we observe it and we put words on it.” Promoting sensory communication and, from there, verbalization is the red thread of the Héka team’s work. An approach that concerns children, adolescents and adults, some with multiple disabilities, others suffering from severe autism or depression after the loss of a loved one: “The idea is to take participants out of their references and give them an experience of stability and continuity, explains Johann Elain.

The opaque and reassuring envelope of the tent lends itself to this, the speakers are always the same and we follow a ritual.” In terms of equipment, harnesses and winches are provided to allow everyone, including an elderly person, to experience magic. “The tools of the circus offer a wide variety of entry points”, emphasizes Clément, sports educator specializing in the reception of people with disabilities and … puppeteer. “If you are down on the trapeze, turning to the wire, the stilts, juggling allows you to unblock yourself.” To everyone, Héka offers a circus where to look for marbles, concrete and symbolic, to move forward in life. Delia Balland

*Names have been changed.

For faith. In Nigeria, the Church standing

In this country, the most populous in Africa, plagued by serious security problems, Christians – who represent 46.25% of the population – are victims of persecution. “They cannot live their religion as they want,” said Archbishop Matthew Man-Oso Ndagoso, Catholic Archbishop of Kaduna State (Northwest). His region, epicenter of banditry, experiences kidnappings of priests and lay people, as well as terrorist attacks. But, despite the dangers and the fear, the prelate continues to hold masses for his faithful. And, above all, to keep this Church standing.

“I don’t want to be an exception,” says Marion Poitevin, 37, while cooking an apple pie at her home in the Savoyard village of Villard-Sallet. However, she has never ceased to be so in her career: first woman to join the High Mountain Military Group, first instructor at the high mountain military school, first female CRS mountain rescuer. A journey that this energetic thirty-year-old, pregnant with her second child, recounts in a book*. She talks about sexist behavior, the difficulties of being considered the equal of her male colleagues. “By breaking glass ceilings, I hope to inspire others,” she says. With its association Lead the Climb, Marion Poitevin offers 160 outings a year, 100% female, in mountaineering, ski touring and ice climbing. “Without the presence of men, sports find their place in the group and progress more quickly,” she observes. And to prove that women can take the lead in operations, resist stress and have the necessary endurance, on the peaks, but also at school, at work, in family life. Before concluding: “It’s just about changing looks, not the world!”

For peace. “Hope is at the end of the road”, Ali Asgari, director

In Just One Night, director Ali Asgari portrays Fereshteh, a 20-year-old Iranian courageously facing her condition as a single mother.

When you shot your film in Tehran, more than two years ago, were the first signs of the current revolt perceptible? This movement has been in the making for ten years. I have six older sisters and many nieces. Thanks to them, I discovered the struggles that women were beginning to lead to escape the moral and religious dictates imposed in our country.

Your film evokes procreation outside marriage, prohibited by the regime. What is this young single mother risking? Unmasked by the morality police, Fereshteh could be thrown in prison. But she also risks being rejected by her family. I received a very traditional upbringing and witnessed the constant moral pressure exerted on my sisters. In Iran, the government dictates to women how their bodies and their lives should look. These injunctions insinuate themselves into the heart of the family unit.

Your film is censored in Iran. You are making a brave choice by continuing to live in Tehran… Having this courage is not an option but a moral obligation. We are living through a very important moment in the history of our country and I want to continue to bear witness to it as closely as possible. My role as a filmmaker aims to offer resonance to current events by creating works of fiction, beyond obstacles.

Do you consider yourself a spokesperson for Iranian youth? No, I’m 40 and my generation has failed to break the rules of tradition. These young people know, better than anyone, how to make their struggles heard. I take as proof the announcement of the assassination of the young Mahsa Amini which went around the world. Contrary to a certain traditional Iranian cinema showing women as victims, I want to reverse the look, like them, by proclaiming: “Look how the Iranian women fight with bravery! Hope is at the end of the road.”

For citizens. The tour of France of the good ideas of a young elected official

Raphaël Ruegger may have studied at a business school in the Ile-de-France, Essec, and worked for a consulting firm on the Champs-Élysées, Evidence, he never feels better than in Neuvy-sur-Barangeon (Cher), where he grew up. To the point that he became a municipal councilor in 2020, at the age of 18. To the point that he was crushed for a while in his student room: “My Solognote forest had been replaced by the concrete slabs of Cergy-Pontoise, he remembers. I no longer ate.” A builder, his father renovated almost the entire village. “I followed him on construction sites. I know everyone.” In 2021, he has the idea of ​​doing a tour of France of local initiatives to innovate in his municipality. The co-founder of Évidence, Grégoire Bourgeois, encourages and finances it. Skilful publicist, he finds a name: the “Federation of stuff that works“. In nine months, Raphaël meets 200 elected officials in 50 departments: “It was extraordinary. Some hosted me in their homes. I brought them our specialties, bottles of Sancerre or Nançay shortbread. We fall into each other’s arms when we see each other again.” Out of 400 good ideas discovered, he selected twenty of them, presented by the mayors concerned at the Madeleine theater in Paris on November 22. “We passed them on to the grinder of our criteria: an initiative that does not come from the State. Proven effectiveness, for at least two years. And duplicable.” A scrupulous investigator, he scoured the bistros to question people on the effectiveness of what he had spotted. Raphaël has already taken up two ideas for his town: a municipal youth council and an association against the digital divide.