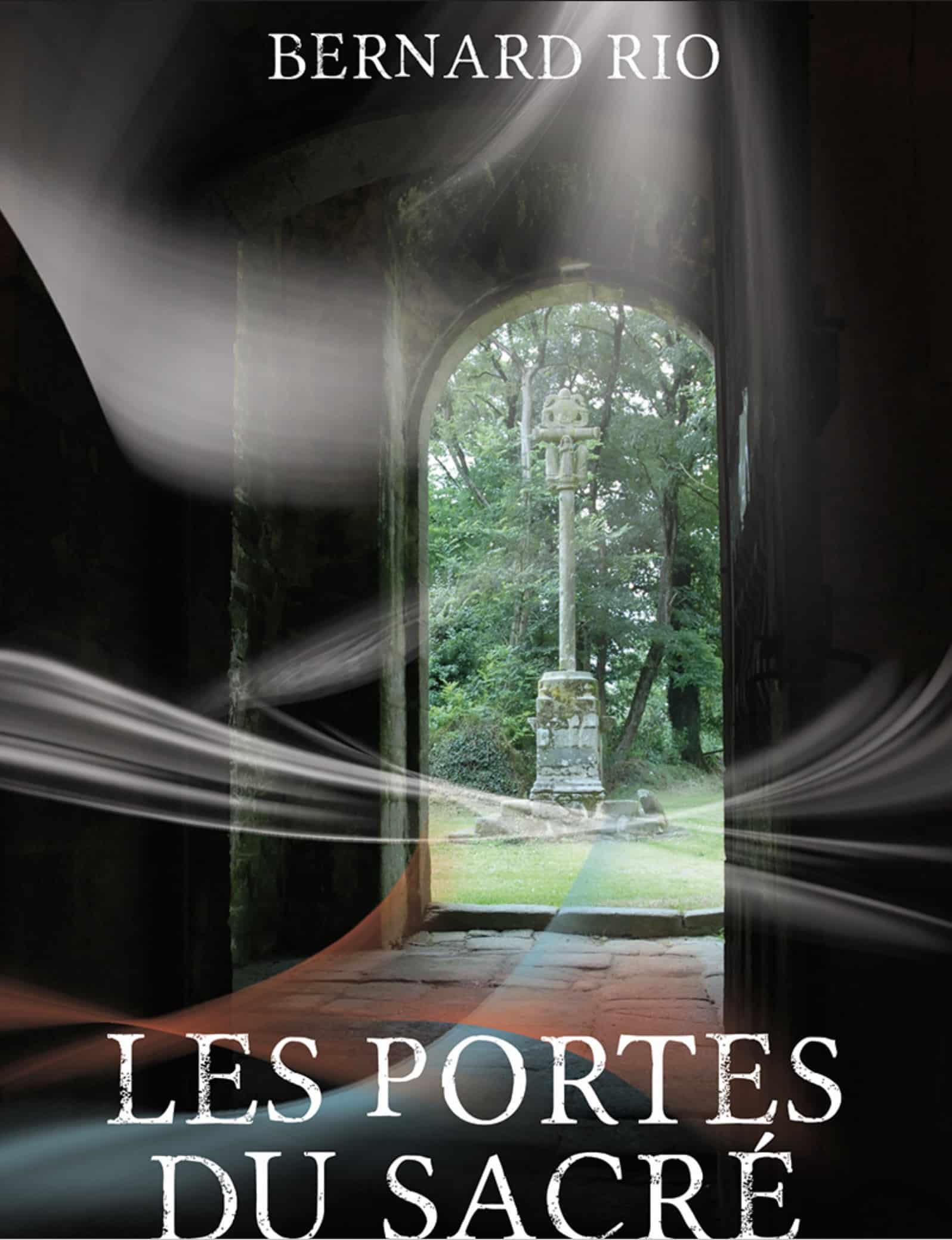 How to visit a church? Which door to enter? Which way to walk? Where is the Stone of the Dead? Why are the baptismal fonts placed to the northwest? How to interpret the ornamentation of the place, for example the figure of the acrobat or that of the mermaid which can represent both an allegory of the woman from the other world, a mythological archetype and an indicator of a current of underground water!

Until the 18th century, no shrines were built haphazardly in the landscape. Builders and image makers built and decorated chapels inspired by a founding legend and a dedication, but also by placing them in a solar orientation in harmony with telluric currents.

This book aims to be a guide for today’s visitor and give him the keys to understand the specificities of sacred architecture as it was designed by the builders.

Breizh-info. You have published many books with different publishers, is this new book with a new publisher a continuation or does it mark an editorial break?

Bernard Rio: After having studied and published on devotions and popular beliefs in Brittany, in particular on the peregrine traditions, the rites of life and death, I became interested in their dedicatees, which gave rise to the “book of Breton saints” in 2016 It was logical to continue my research on the places patronized by the saints and where religious practices were maintained. “The doors of the sacred” therefore deal with sanctuaries, and are part of a continuity of my work. However, Ar Gedour’s editorial approach is innovative and can mean a break, or at least a change of course in the way of designing a book and distributing it.

The edition is in the image of the company. She is sick, as if struck by a mixture of racketeering, nepotism, egocentrism and wokism. However, there is no problem without a solution. And the publication of “Portes du sacre” is an adventure out of the ordinary. Perhaps it is a utopia, but if that were the case it would be a fruitful union of thought and action auguring a new cycle!

This is a first for an author like me, accustomed to working within a “classic” publishing framework: a publishing contract prior to the writing of the book, then, after delivery of the manuscript, total freedom to the publisher to produce and distribute the work.

In the case of “Portes du Sacré”, the publisher used its client file as well as social networks to promote the work well in advance of publication, which made it possible on the one hand to verify the adequacy of the project with the readership, and on the other hand to finance a large part of the layout and the printing of the book.

When the subscription was closed, the pre-sale of the work continued until the publication of the book in October. The readers thus validated the publisher’s approach, which however had to overcome a major handicap at the end of the summer: the soaring prices of paper and manufacturing due to the energy crisis!

In this same logic of paradigm shift, the publisher has associated booksellers with the promotion of the book. A cycle of conferences was organized in Brittany with the help of audiovisual and alternative media (radio and social networks). Here again, it was a new and rewarding approach. The results are positive, and I can only thank the publisher Eflamm Caouissin for offering me a new way of working. The publication of the “Portes du sacre” bodes well through its participatory form and through its transdisciplinary approach to an innovative edition. The success is there since the first edition of the book will be sold out before Christmas.

Breizh-info. Can we say that this book is part of a new economy?

Bernard Rio: Indeed, the world is moving. And publishing is no exception to this change. She will have to adapt. I believe we are at a crossroads, one foot in the old world and one foot in the new world. Publishing, distribution of books, bookstores, events and literary fairs… All of this will have to change in order not to disappear. Today, with the experience initiated by Ar Gedour, it is timely and essential to share information before buying a book. It is thanks to the readers that this book was made possible. Like the publisher and the partner booksellers, readers can be actors and not just consumers.

I believe it is useful to involve readers in the editor’s approach. The world of books is no exception to what is happening in the world right now, a tremor on the surface and a movement of great magnitude in the depths! It is up to everyone not to cling to an old regime and to imagine new solutions, different economic relationships, less unbalanced than those resulting from the society that is cracking before our eyes!

Breizh-info. To come back to the subject of your book, what is its originality?

Bernard Rio: This is a book co-written with Loïc-Pierre Garraud, Alain Perrot and Jean-François Le Roux, who each brought their stone to the building, both in the fields of architecture, geology and geobiology as well as in astronomy. In the first part of the book, we explain how, why and where the builders erected the sanctuaries which are part of a long time. Until the 18th century, no sacred building was built at random in the landscape and built without reference to the divine proportion, that of the sacred numbers to which Vitruvius referred. Builders and image makers built and decorated sanctuaries by placing them in a solar orientation and in harmony with these cosmo-telluric principles. There is an obvious coherence between the place and the iconography which can also be explained by the symbolism. A chapel, a church, a basilica, a cathedral are places apart, cut off from a profane space and time. A Catholic church, whether Romanesque, Gothic or Baroque, differs from the Protestant temple, the synagogue and the mosque by its design, which is closer to the Gallo-Roman or Gallic temple. A sanctuary is obviously not the equivalent of a theater or a municipal multi-purpose hall. Nor is it the abstract space of architects. It is not just a place of prayer. It is a place of transformation of the carnal man into a “spiritual man”, to use the language of Saint Bernard. The Christian sanctuary thus takes up the codes of the fanum, in its location in singular places (hills, river bends, etc.), away from cities, in its form (centered plan) and in its worship function linked to individual and collective practices, sedentary and peregrine… as well as in its dedication and solar orientation.

Breizh-info. Can we say that your book is a kind of guide to be able to analyze, observe, study, understand what constitutes our religious heritage?

Bernard Rio: In a sanctuary, nothing is trivial and every detail is significant. The interpretation of art historians does not contradict the vision of geobiologists, which does not go against the symbolic analysis of mythologists, the doctrine of theologians and the speculations of philosophers… Such are, for example, the multiple meanings that can be accord to the interlacing and volutes on the arches of the porches or on the pillars: artistic motif, energy function, religious cryptogram… Similarly, the chapels of the apse correspond according to the vision of each other to the bursting of the water or an architectural style…

Outside the building, on the plasterboard, everything is equally important. In the enclosure of the church of Locquénolé is a Calvary, under which flows the current of water, the arms of the cross indicating very precisely the direction of the current which crosses the southern porch! In this same church, the orientation of the nave corresponds to sunrise on the day of the feast of the translation of the relics of Saint Guénolé, the founder and dedicatee of the place. The same is true in all the sanctuaries we have studied. The first part of the book deals with the methodology we have developed to study shrines. The second part is the transition from theory to practice. We study twenty-eight buildings spread throughout Brittany, large sanctuaries such as Saint-Samson Cathedral in Dol de Bretagne and small chapels such as Saint-Marcellin in Mouaye.

After reading our book, everyone will be able to study and understand the architecture of their chapel or parish church, since these buildings predate the French Revolution, which marks an architectural, symbolic and spiritual break. Our discourse is of course valid for Brittany since it is the territory we are studying, but it is also valid for all the sanctuaries of Western Europe, in Auvergne, Burgundy, Picardy, Saintonge…

Link to order the book:

“Les Portes du Sacré” has just been published… and is a real success! – Ar Gedour

[cc] Breizh-info.com2022, dispatches free of copy and distribution subject to mention and link to the original source

Bernard Rio (The gates of the sacred): “In a sanctuary, nothing is trivial and every detail is significant” [Interview]