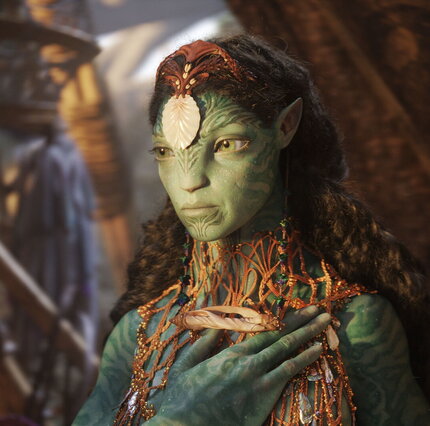 James Cameron reopens the doors to the ‘Avatar’ universe. It does so with an immersive and all-encompassing sci-fi and “marine” western, between spirituality and travel between genres, in which the invaders remain humans (with some positive exceptions) who need a new planet to leave a now dying Earth, where but the natives must be “reassured”. “Avatar: La via dell’acqua”, also in the 3D version, is released in 1,200 theaters and for cinemas in great crisis in the post-Covid era it can be a healthy boost of energy. This episode should be followed by three other sequels, again based on the success of “La via dell’acqua” (the third, already almost ready, costing 350 million dollars, could be released in 2024), always focusing on a cutting-edge creation in production techniques and technologies, from 3D to performance capture, often reinvented by the director himself.

This time Cameron takes the audience back, between game and narrative fury, to other cornerstones of his cinema, with the most obvious reference, “The Abyss“, to “Titanic” passing through “terminators“. All by combining the constant environmentalist message, a reflection from multiple perspectives on the sense of family, between fears, conflict, love and passing of the baton; a strong sense of hope in the new generations, plus a particular attention to enriching its already impressive galleries of strong women (in different ways), of all ages.” I wanted to go deeper into the emotions – explained the director in the international streaming press conference – in family dynamics and the responsibility of being parents, also showing the children’s perspective”.

Thus we return to the luxuriant triumph of biodiversity of Pandora, about 15 years after the events of the first film, with the Na’vi led, in the battle against the ‘invaders’, by the ex marine Jake Sully (Worthington) remained with his avatar among his adopted people, where together with his partner Neytiri (Saldana) he created a family of 4 children. Among these there is also the adoptive Kiri (Sigourney Weaver, who accepted the challenge of giving voice and movements via performance capture to a teenager), born from the avatar of the scientist Grace Augustin. When Sully finds himself the target of Colonel Miles Quaritch (Lang), also revived with his best soldiers in avatar version, the marine and Neytiri decide to avert the danger, bringing the family into the oceanic Metkayina clan, who live in spiritual symbiosis with creatures, even gigantic, of the sea. A new life and an apparent peace, destined to end.

“It’s important for a sequel to honor what the audience loved about the experience the first time around – Cameron explained – but you also have to throw them off balance by proposing what they don’t expect and here are many surprises in the story”.

“Avatar – La via dell’acqua”, the wait is over: James Cameron’s ecological blockbuster arrives in theaters

Too Hot To Handle Season 4: 10 Best Cast Members, Ranked | Pretty Reel
Nigeria: History of Music in Lagos, from the Colonial Era to the 1970s
The story of Ernst Lubitsch, director and actor 130 years after his birth
Tweet
Share
Share
Pin