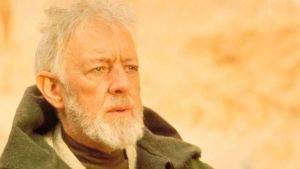 When Sir Alec Guinness walked in his clergyman’s stage clothes, something happened that would change the course of his life

The recent news of actor Shia LaBeouf’s conversion to Catholicism after playing Padre Pio made me think of other actors who have played priests or religious.

Who can forget Gregory Peck neither The Keys to Heaven, Rosalind Russell in Trouble with the Angels or Bing Crosby And Ingrid Bergman in The Bells of Santa Maria?

Some actors have even converted to Catholicism after playing clerics or religious in a film. One of the most touching stories about it is that of Sir Alec Guinness.

Most young people know him as the Obi-Wan Kenobi of Star Warsbut Sir Alec Guinness he played many other unforgettable roles.

From Shakespearean tragedies (he played Romeo and Hamlet) to war and spy films (The Bridge on the River Kwai And Tinker, Tailor, Soldier, Spy), Guinness has had a long and notable acting career.

It was precisely through his work that God called him to conversion. Guinness was in fact chosen to play Father Brown, the crime-solving Catholic priest invented by GK Chesterton, and traveled to France for filming in an isolated village.

One evening he was returning to his lodgings still wearing his cassock, his “stage dress”. While walking through the French countryside, something simple but extraordinary happened that would change the course of his life, according to the Catholic Education Resource Center:

“A little boy ran up to him and took his hand, starting to walk beside him and chatting cheerfully in French. Finally she greeted him with a cheery ‘Au revoir, mon pere!Guinness was struck by the episode, wondering if a priest’s simple garb could inspire that kind of confidence and joy.”

The actor didn’t speak French, so he didn’t understand what the child was saying to him and failed to correct his mistake, but actions speak louder than words, and he was deeply moved by the child’s actions. He later wrote:

“As I walked on, I reflected that a Church that could inspire such trust in a child, making priests, even when they are unknown, so easily accessible, could not be as intriguing or creepy as it is often pointed out. I began to shake off the prejudices ”.

One feels a twinge of pain reading his words in the light of the fact that some priests have abused that trust.

However, it is remarkable to see how this child, whose name we will never know, influenced the famous actor in such a strong way.

Guinness did not immediately convert to Catholicism. He faced a few more doubts and witnessed more examples of God’s providence.

One of these was the recovery of her young son, who was stricken with polio and paralyzed from the waist down at age 11. His son became a Catholic before Guinness!Catholic culture reports:

“The boy’s future was uncertain, and at the end of the working day Guinness began going to a small Catholic church on his way home. He decided to make a deal with God: if He let Matthew heal, he wouldn’t get in the way if the boy wanted to become a Catholic.”

“Luckily Matthew made a full recovery, and Guinness and his wife enrolled him in a Jesuit school. At 15, Matthew announced that he wanted to become a Catholic. Guinness kept his covenant with God, readily accepting the boy’s conversion.”

Slowly, Guinness’s heart continued to melt towards God. He began meeting a Catholic priest, did a retreat at a Trappist abbey, and attended Mass with Grace Kelly while he was working on a film in Los Angeles.

Eventually, Guinness was accepted into the Catholic Church by the Bishop of Portsmouth. His wife converted soon after, and the two remained Catholics all their lives.

There are strong parallels between the experiences of Guinness and LaBeouf, who converted after playing roles as priests, and we wish the young Shia all the best.

I find myself wondering what happened to the child that affected Guinness so much. It’s really true that we never know the effect that we or our children will have on others.

All we can do is faithfully plant the seeds, trusting that God will bring forth the harvest on a day we may never see on this earth, but we will see and rejoice in heaven.