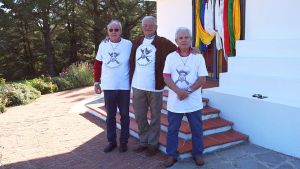 Amiata – The area of ​​Mount Amiata was the location chosen by the “La Cinghialessa” Club to bring together again, after the end of the summer, intellectuals, professionals and scientists from Maremma and beyond. On the initiative of the writer, essayist and historical memory of Gavorrano Franco Balloni, on Saturday 8 October, a large group, coming from different areas of Tuscany, met in Castel del Piano, in the province of Grosseto, to start the day in the historic restaurant – hotel “Da Venerio”, which is located on the slopes of Monte Amiata and which boasts a tradition in catering for over 50 years. The well-known restaurant opened its doors in 1964, thanks to the passion for the typical home-made culinary art of a boy named Venerio who, together with his wife Maria, started this activity which, in all these years, has delighted the palates of many people passionate about the Tuscan mountains and the renowned places of Montecucco, the Val d’Orcia and the Terme di San Filippo.

Today, Venerio and Maria are replaced by their son Riccardo who, together with his daughter, is continuing the tradition started by his parents. After lunch, the group made up of the president of the “La Cinghialessa” Club, Carlo Soldatini, from Rome, a former Treccani graphic designer, some doctors from Piombino and Lucca; by Sveva Avveduto, National President of Women and Science, emeritus professor at the CNR and writer; by Giuseppina Scotti President of the UNITRE Association of Grosseto, internationally renowned poet and writer as well as literary critic; Professor Francesco Zetti, high energy physicist researcher and ocean navigator; the talented wood sculptor Giuliano Bigazzi; Cristine Hister multi-instrumentalist and internationally renowned music singer-songwriter; Foscarina Di Grande professor emeritus in zoology at the University of Bologna; Carlo Soldatini, international writer and photographer; Paolo Volpini of the Culture Office of the Municipality of Piombino, secretary of the Astronomers Association of Piombino and coordinator of the dissemination of the UAI (Italian Amateur Astronomers Union); Letizia Leonardi, journalist and writer, author of works dedicated to Armenian history and literature and Professor Mariatea Di Grande Fuligni, research physicist, university and high school teacher in Bologna, dedicated himself to the care of the spirit and went to Merigar, an International Tibetan Center, immersed in the nature of Arcidosso. 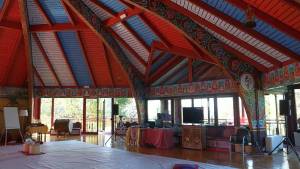 Surrounded by hills stands the Temple of Great Contemplation, conceived, wanted and built by Chögyal Namkhai Norbu and inaugurated in 1990 in the presence of the Dalai Lama. A place visited by many well-known personalities, one of all the American actor Richard Gere. An oasis of peace and spirituality between Mount Amiata and Mount Labro. The main temple, where meditation courses and moments of dance are held, is octagonal in shape and is built in wood, glass and copper. There is no shortage of particular decorations, classics of the Tibetan style. The Temple of Great Contemplation is called by all “the Gönpa”, which in the Tibetan language means “withdrawn, silent place”.

The Merigar Gönpa has hosted numerous teachings by Chögyal Namkhai Norbu and is also the place where seminars, courses, conferences and the various activities foreseen in the annual program are held.

The outside and inside of the Temple are decorated with astrological and protective symbols, and with syllables and mantras written in ornamental characters which have the function of purifying and positively influencing the visitors who enter. Inside, on the eight sides of the temple, numerous masters belonging to different Buddhist and non-Buddhist traditions are depicted. Of notable importance is the west panel painted by Dugu Choegyal Rinpoche, a Tibetan master and artist known throughout the world. Inside the park you can admire other structures, you can walk surrounded by greenery, up to the mausoleum that houses the remains of the founder of the Center and the various monuments, in the silent tranquility of nature. At the end of the day, the organizer of the Club, Franco Balloni, greeted those present by reading a poem he created to commemorate the pleasant meeting.