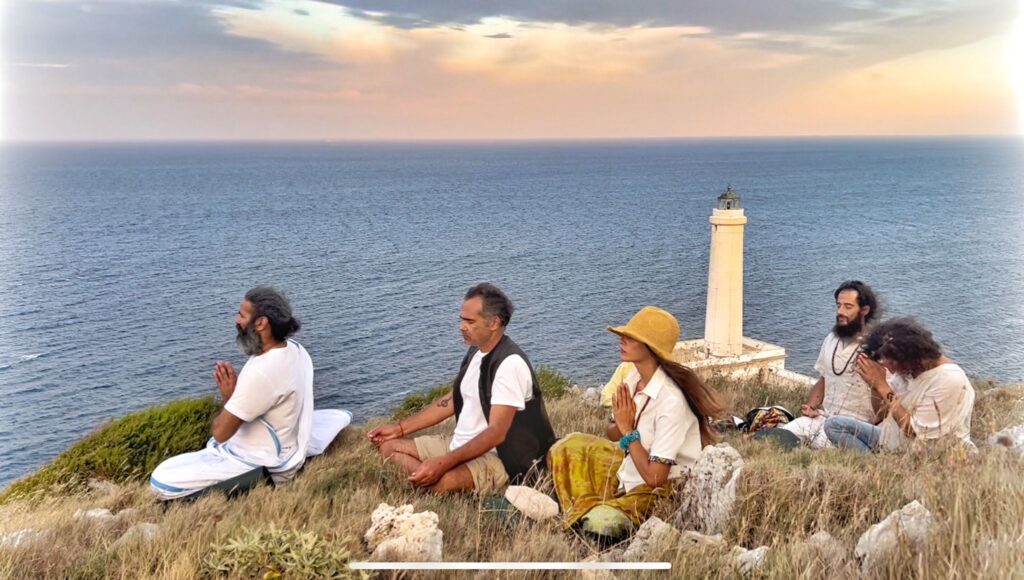 What happens when for a moment you cross the path of Yari Carrisi Power? If you know his world, made of yoga, meditation, music and spirituality, cinema, travel you can live the experience of the “extraordinary”, and you remember how rare it is to know people and places permeated with a certain ‘light’.

A feeling of harmony envelops his world, a world certainly itinerant, but also made up of roots, like those of a long story that sees Cellino San Marco at the center: it is in that corner of Apulian land, where you can still breathe the myth of a great love story, of what, despite time, survives granite, and in the form of “A good energy”, which Yari walks along some of his steps, with his “traveling friends” around him, who accompany him through very special itineraries. His new project is called Yaryatrythat in Sanskrit it means “traveling friends”.

The concept of friendship emerges in its simplest sense and there are many paths to share with Yari. Deeply immersive life experiences, between yoga, singing and meditation, and an inevitable contact with nature.

Yari’s last pilgrimage started in August just from Cellinothe native house, the estates of Albano, alongside the master Swami Sachidanand, who arrived in Puglia from Rishikesh in India, to do two days of Yoga courses and philosophy lessons in the woods.

Around him there is no lack of Romina, a luminous presence in the group, maternal and magnetic, she seems to have honey, anyone who wishes to be close to her and take some of her energy. When you find yourself next to Romina you have the opportunity to confront a myth: at first you have a bit of embarrassment, then it takes very little to understand how incredibly human she is, able to teach you many things with her little big gestures and she shares with the others generously what he has learned from his life path. It is nice to see the incredible resemblance to Yari, the harmonious alchemy that exists between them. He tells us about this new adventure alongside his son:

In August, Swami Sachidanand from India came to visit us here in Puglia. he is one of the most authoritative custodians of the Vedic culture from which Yoga comes: the oldest method of knowledge of human history on a physical, mental and spiritual level. Practically the oldest way to well-being.

Swamiji explained to us that Yoga is not just a series of exercises, but also a method of staying healthy through food, breath, meditation and choral singing.

The day began with meditation and Pranayama which is an ancient tradition of yogic breathing, followed by physical postures called Asanas.
After an exquisite Mediterranean Ayurvedic breakfast we followed Swamiji into the woods where he explained the philosophy of Yoga.

It was nice to hear those words immersed in nature because it made you feel at one with creation. He has studied in Vedic schools since he was a child and is very knowledgeable on the subject, but he explains it with extreme simplicity, creating a special atmosphere in the group and raising our consciences.
In the evening we gathered to chant mantras thus amalgamating the group with these fascinating millennial songs.

The experience was so wonderful that we decided to repeat it. In the next retreat, in addition to the usual teachings, Swamiji will dedicate a day to teaching how to relate consciously.

At the end of the retreat there will be a meeting with a mantra concert open to the public in a theater in Puglia. At the next meeting!

From meditation at dawn to singing in the garden at sunset

The retreat included meditation at dawn until the early hours of the day, at 9 Yoga philosophy lessons in the woods, followed by a vegan lunch, not a simple lunch, but a sensory experience, through a food selected and prepared by the Apulian chef Marigi, to enhance the energy and well-being of the organism. Besides the Pranayama and the yogic physical gymnastics Asana, she followed finally Kirtan, a practice that keeps stress awaythen the evening before a very convivial and relaxed dinner, always of vegan delicacies, in the most evocative corners of the forest, under the light of the stars, the songs followed to end the day in an atmosphere of magical harmony around Yari.

The interview with Yari Carrisi Power

The editorial staff of ildigitale.it shared this wonderful retreat with Yari, we asked him to tell us about the beginning of the Yaryatry project, which was inspired by the meeting with the North Indian master Swami Sachidanand, an expert in Yoga philosophy, since he was a child dedicated to meditation and the study of Bhakti Yoga. All this, however, was not born yesterday, but dates back to something more ancient: Yari finally reunites with an important existential approach, which already existed 30 years ago in his life. We interviewed him to learn more.

How much did Yari inspire you when you met your master Swami to inaugurate this wonderful project?

I met Swami Sachidanand a decade ago while playing guitar in the abandoned Ashram of the Maharishi Mahesh Yogi in Rishikesh where the Beatles had studied. He immediately taught me Pranayama, an ancient breathing technique that helps oxygenate the body and free the mind and we have remained friends over the years.

In May of this year I studied at his school in Rishikesh, D’Vine Yoga. He not only teaches Asanas, but being one of the most authoritative custodians of Vedic culture, he teaches philosophy and lifestyle of yoga, which is the oldest method of knowledge of human history on a physical, mental and spiritual level. Practically the oldest way to well-being. The experience was so positive that we decided to share it with my family and friends here in Puglia. Our August retreat was wonderful.

What does yoga represent for you and what would you say to those who want to approach this culture for the first time?

The way of yoga is what humanity needs to create the right balance internally and externally. It is not something foreign to our culture or that upsets our way of being and has no religion, caste, color or creed. Yoga is union. You are welcome to share this experience with us.

With this great project of yours you are finally finding yourself, how important is the family path and your Puglia?

It all starts with my mother, who after meeting my father in the late 60s falls in love with Puglia, because it reminds her of California and Mexico where she grew up. We are talking about a land that has a lot in common with other of her places as well. Taranto reminds me of Los Angeles: it faces the same direction, it has the hills behind it, it has the same type of vegetation, it has the sea in front, it has the sun. Only the sea is warmer. We are in the European center and if Ilva were a film or research center this place could become another Los Angeles. In addition, as a mascot we also have Rudolph Valentino who comes from there who was the first great famous actor in Hollywood and comes from there. It is no coincidence that I also see the area of ​​taranto as Los Angeles, geographically, as light and colors.

My mother fell in love with Puglia for these reasons: she convinced my father to come back here because he was projected abroad, he lived between Rome and Milan and was about to move to France to live elsewhere, she convinced him to return here during the period in which everyone escaped from Puglia. Between the 80s and 90s it was no joke, people ran away, there were the Red Brigades, there was the underworld, they were the years of kidnappings. It was a very very difficult period for Italy for southern Italy and for Puglia. So it was a brave choice.

Was Romina’s approach to yoga, which she deeply transmitted to you, already at a very young age?

When he came here for the first time he fell in love with the Cellino wood, and in that period for the engagement with Stanislas Klossowski, best friend of Brian Jones founder of the Rolling Stones, son of the painter Balthus, he attended a series of artists inserted in the culture of the Avant- garde- I don’t want to call them hippies, this dimension was very similar to the yogic world and the influence of this on the western world and the Beatles and the Beat Generation. You brought her world to Puglia: this was Cellino’s dream.

How did Romina transform the Cellino wood into a place of American culture?

The initial idea was to make the Bosco a place of culture, music and avant-garde, get away from the cities and the smog, living a healthy and natural life with the genuine people of the place with the endemic internationality of Puglia, a land where enough travel 30 km to cross different eras, cultures, invasions. Next to this, however, we had an American base, so we grew up geographically in Puglia but in reality we were culturally American.

Until 1993 I was totally immersed in American culture however in an Apulian context, I went to school there but there was always the American base, our village was created for Americans, in the era before the internet: our musical, cinema and information culture was in tune with that world there and so it was from the 70s / 80s until the mid 90s, then after Ylenia’s disappearance the American base is also closed.

Is there a before and after Ilenia? How did you survive the shock?

For us it was really a culture shock, an epochal change from many points of view, because all of a sudden we found ourselves in the situation that in this village we did not know what to do: it was born for the Americans, it was a whole different projection. This created a life problem! The connotations have changed since Ylenia then disappeared, since my mother left, in Cellino the mood has completely changed.

I no longer recognized the place: neighboring businesses were born, which do not reflect the initial dream for which this place was founded. There was no longer an affinity with the rules, the spirit of a place created under love, peace, meditation, music, culture, cinema, art, positivity, genuine eating.

But now you are building your happy ending, can you tell us about the found paradise?

It is with this new era of yoga and Vedic culture, married to Greek philosophy and great Europeans, that we rejoin our original life goal. But here there is freedom, we are not talking about religion, caste, color, or creed, but about a culture of psychophysical spiritual well-being thousands of years old, thanks to people who before us in the Himalayas, through a research lasting millennia, even making their mistakes has given us the ne plus ultra of scanning for human well-being for how to say the raison d’êtrethe reason for existing on this earth.

With Swami being an authoritative custodian of this school, we are continuing this beautiful dream that led me passing through Allen Ginzburg from New York took me to Mount kailash in Tibet, the earthly abode of God Shiva and took me there and then made me discover India and made me discover yoga.

The retreat experience will be repeated at the end of October. This time there will also be a final mantra meeting and concert in the Paisiello theater in Lecce, on October 30th. In addition, on Saturday 29th the Swami will address the topic of relationships and teach how to relate consciously.

A paradise signed by Yari Carrisi Power between yoga and pilgrimages