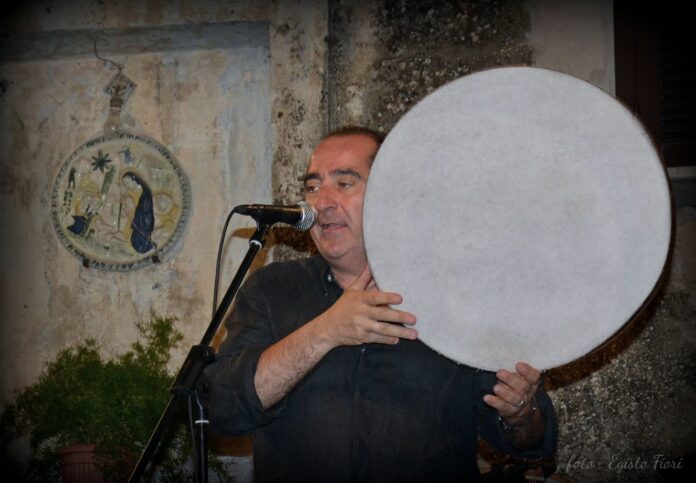 GREENHOUSES (SA) – On the day of the tapping of the barrels, Friday 11 November, “A Chiena” announces two days of music in Serre in the enchanting setting of the Palazzo Ducale, with a concert by the trio Café Loti and a two-day workshop entitled “Songs of distant voices and Terra Madre ”with Nando Citarella

“San Martino, every must is wine!”. Friday 11th November we celebrate San Martino Bishop of tour, patron saint of sommeliers, coopers, horses and riders, as well as married and engaged men. The veneration for San Martino is deeply felt, and there is no day of the year that there is no reason to invoke the great saint. Apart from the opening of the barrels and therefore the celebration of the end of the agricultural year, with the harvest of the last fruits and the last banquet before Christmas, warmed by the warm sun that is a prelude to the shortest, darkest and most rigid days of the year , its name is linked to the miracle of the division of the cloak among the beggars and to the miracle of the summer of San Martino. “’A Chiena” – Intervention co-financed by the POC Campania 2014-2020. Urban regeneration, tourism and culture policies. Unified program of cultural, naturalistic and eno-gastronomic tourist itineraries of national and international scope – signed by Antonello Mercurio, returns to the Doge’s Palace of Serre (Sa), for two events in honor of San Martino and the Wine Festival. The first will see, on Friday 11 November at 9 pm, in the ducal palace of Serre, on stage the Cafe Loti a trio with the strings, the voice and the tammorra of Nando CitarellaArabic and Middle Eastern voice and chords of Stefano Salettithe Iranian musician (and painter) Pejman Tadayon voice, saz, oud and percussion. The Café Loti in Istanbul was, temporibus illis, a place of mediation, of exchange of ideas, of disputes that inevitably ended in reconciliations. . The languages ​​learned from each other to understand each other on the lowest common denominator of common roots, on the affinity of sounds, and where the etymological roots did not help, the imagination of composing a mosaic with fragments of sounds and senses of other languages ​​helped understand each other for real. Thus the sabir was born, for example, with a fiction in many ways identical to that of Swahili in Africa. There are two large backgrounds that we will recognize in the lineup, the first contains pieces that account for sound fragments of medieval Spain, Naples and the French troubadours, the sabir to understand and trade, Persia as the keystone for access to the East. In the second part, which entitles the whole project, In Taberna, Café Loti instead recovers the original spirit of the Codex Buranus, the corpus of compositions that everyone knows in the sumptuous and thundering version of the Carmina Burana. Here the intent is quite different, a work by subtraction that instead tries to restore a subtle balance between sacred and profane, nature and culture, malicious songs and pure mystical expressions: and here too many languages ​​resound, to compose a tapestry that is really beautiful. because multicolored. A two-day concert is added to the concert workshop, by Nando Citarella himself, which will start at 3 pm on Friday 11 November, in the ducal palace of Serre, to end in the morning of the following day, entitled “Songs of distant voices and Mother Earth”. The Workshop will be an opportunity to explore the anthropological origins of the “healing force” of music in the rituals of popular tradition, experimenting with the rhythms of Tamurriate, Pizziche and Tarantelle, linked according to the Jesuit abbot Athanasius Kircher, linked to the cult of Dionysus, publishing then in Rome in 1641 with the title De arte magnetic the result of his studies on tarantism, chiaroscuro dances, to be danced in balance on the fine line between joy and pain, between health and illness, between madness and reason. A narrow space, limited by the short radius of an obsessive and hypnotic harmonic tour, capable however of hosting an entire universe, a world in which life and death strike as fast and relentless as the bite of an insect.

Musician, actor, singer and scholar of popular, theatrical and choreutic-musical Mediterranean traditions, he studied and collaborated with important master artists such as: Eduardo De Filippo, Dario Fo, Linsday Kemp, Roberto De Simone, Ugo Gregoretti and Andrea Camilleri. He followed his singing studies under the guidance of teacher Maria Rohrmann from 85 to 2008 as well as with Alfredo Kraus and Walter Blazer in Italy and in the United States of America. Winner in 81 of the Record Critics Award (with Francesco Manente). In June 2003 he was appointed honorary member of the Register of Italian and European Writers and Artists for the Italian National Commission for UNESCO. Since 1987 he has been the artistic director of the “La Paranza” Company which he founded together with scholars and experts in popular traditions. Since 1990 he first collaborates with the CRM (Center for Music Therapy founded by Gianluigi di Franco), as an expert and teacher of Popular Traditions, Research, Therapy, Folklore and Movement. In 1994, commissioned by the Romaeuropa Festival, he founded I Tamburi del Vesuvio, a pioneering project on musical interculture between dance, rhythm and vocality in collaboration with Timba, the percussion school of which he was a teacher. He has recorded both solo and group records, from Dindirinella (1980 Winner of the Record Critics Award in 1981 with Francesco Manente), to “Carosonando” with the Tamburi del Vesuvio (2013 alpha music) and “Deh come to the window” ( 2011 nandus vesuvianus) with the guitarist Francesco Taranto (with whom he collaborates on projects on the romantic guitar). He played the role of the “Jester” in the programs “Domenica in” with Pippo Baudo, in the “Castello di Partita Double” in “Variety”, “The Goose Game” and finally in “Luna Park” (the Black Moon!) with Frizzi, Venier, Magalli, Falchi, Lambertucci, Carlucci, Conti, Bonolis, from ’92 to 2000. He collaborated with the Marrucino Theater of Chieti (’98 / 2008) for Sergio Rendine’s “Passio et Resurrectio” performed worldwide both in Rome (2000) and in Pompeii (’98) and Jerusalem in (’00 / ’06) under the direction of Gianluigi Gemetti, Marzio Conti and Maurizio Dones. He collaborated with the Abruzzese Symphonic Institution for a project on “Pusteggia”, also recording a CD (‘A Pusteggia 2001 finisterre) under the direction of Luciano Bellini taking it on tour (2009/2010) in Italy and abroad. He collaborated as a teacher and director in the “Mediterranean Project” a sea of ​​cultures for ATAM conceived and directed by Andrea Camilleri. He has held workshops on Italian Folk Singing and Southern Italian Dances at the branch of the Salzburg Conservatory in Puchberg and Wels. He is the founder and artistic director of “Etnie” (1991) with the Interamnense Music Academy (workshops on popular traditions and interculture). He founded the National Coordination of the Right to Music in 2008, of which he is also vice president in 2008, his work “Mozart al Chiaro di Luna” wins the music critics prize as the best production in Latvia and Kazakhstan. In 2009 he made his debut with “A solo… .e un po ‘in Compagnia” which he then took to the Carnegie Recital Hall in New York, celebrating his 50th and 30th years on stage alongside John La Barbera and Alessandra Belloni. He was the soloist of Romanze Italiane with the Orchester National de Lyon and of the Gevandhause of Leipzig under the direction of Maestro Jun Merkul. From 2001 to 2011 he was the “Posteggiatore” of the radio show of Radiouno “Ho Perso il Trend” with Bassignano and Luzzi. He composed the music of Leonardo Petrillo’s “Imaginary lovers” for the Teatro di Roma. He is the promoter of the Folk Nostrum Project (the route to the cultures of the Mediterranean). He actively collaborates with Patrick Vaillant and the Melonious Quartet with Lucilla Galeazzi (of which he is a guest both in the latest record and live “Festa Italiana”). With Mauro Palmas and Pietro Cernuto he formed the “TA-MA” trio with the collaboration of Elena Ledda, between classic and tradition (Sardinia-Campania-Sicily) debuting at the Expo Jazz 2013 in Cagliari. He recently published his latest work with the Tamburi del Vesuvio “Carosonando” (alpha music), a tribute to Renato Carosone (between jazz and tradition) with a tour in the major Italian cities. He participated with “La Paranza” as the only Italian ensemble in the “Mozartiana” Festival held in Gdansk on 20/21 August 2013 with the project “Mozart and the music of the ancient sea” (which he conceived and arranged with Maestro Pietro Cernuto ) and again on 18 September 2013 in Oviedo (Asturias) he presented his symphonic project “Magna Mater” (orchestrations by Maestro Pietro Pisano) with the Oviedo Filarmonia Orchestra conducted by Maestro Marzio Conti for the Sociedad Ovetense de Festejo.

Multi-instrumental musician and composer, he plays instruments of the Mediterranean musical tradition (bouzouki, oud, mandola, tzouras). Active for years on the Italian art scene, he is the founder of Novalia and Piccola Banda Ikona, a group that sings the ancient Mediterranean language in Sabir. Since 2008 he has been the musical director of 7 Sóis Orkestra and since 2010 of Les Voix du 7 Sois, groups that bring together musicians from the many countries bordering the Mare nostrum (Spain, Morocco, Israel, Egypt, Portugal, Croatia, Italy). In recent years Saletti has worked to enhance the sounds and cultures of the Mediterranean. His musical research combines the atmospheres of the southern popular tradition with Balkan, Arab, Greek and Sephardi melodies. In particular, he worked on the rediscovery of Sabir, the ancient lingua franca that sailors, pirates, fishermen, traders spoke in the ports of the Mediterranean, a sort of maritime Esperanto gradually formed with terms taken from Spanish, Italian, French, from Arabic. He has lectured in Italy and abroad on the Sabir and the musical and cultural influences between the countries bordering the Mediterranean. He conducts courses, seminars and workshops on the music and instruments (oud, bouzouki) of the Mediterranean. He has collaborated with prestigious international musicians, including Hector Zazou, Eva Quartet, Alexander Balanescu, Eyal Sela, Jamal Ouassini, Margarida Guerreiro, Juan Pinilla, Talya Solan, Wafir Shaikheldin, Rashmi V. Bhatt. He created the suite in 5 movements from Arthur Rimbaud’s “Le Bateau Ivre” to a reading by Jean-Louis Trintignant and composed music based on texts by the Tunisian poet Monchef Ghachem. He has composed soundtracks for theater, cinema and TV collaborating, among others, with Giancarlo Giannini, Predrag Matvejevic, Pamela Villoresi, Mascia Musy, Omero Antonutti, Massimo Popolizio, Manuela Mandracchia, Pupi Avati, Maurizio Panici, Piero Maccarinelli .

Iranian musician and painter, he was born in Esfahan (Iran) in 1977. He began studying the Radif (ancient repertoire of Persian classical music) and Persian instruments (târ and setâr) at a young age with the masters Kamran Keyvan, Mohammed Reza Lotfi and Behrooz Hemmati. He performs in several concerts in Iran. In 2003 he moved to Florence, where he studied composition at the Fiesole Music School and painting at the Academy of Fine Arts. In 2005 he moved to Rome, where he studied at the Academy of Fine Arts and collaborated with the traditional Persian music group “Sarawan – Tamburi d’Iran” and with several musicians including: Mauro Pagani, Massimo Ranieri, Patty Pravo, Andrea Moricone, Andrea Parodi, Paolo Vivaldi (with whom he released the album “Chador”). In 2006 he founded the traditional Persian music group “Navà”. In 2007 he recorded the cd “Journey into the colors”. In 2008 he participated as an actor and musician in the film “The Last Pulcinella” by Maestro Maurizio Scaparro and lead actor Massimo Ranieri. In 2009 he collaborates again with Maestro Maurizio Scaparro as a musician and actor, staging the theatrical comedy “Polvere di Baghdad” with Massimo Ranieri and Eleonora Abbagnato. In the same year he founded the group “YAR” (Iran, Italy, India) with Andrea Piccioni and Sanjay Kansa Banik and released the cd “Yar Ensemble”. He collaborates with Moni Ovadia and the Esquilino Young Orchestra as a teacher of oud and percussion. In 2010 the second CD of the Navà “Hilat” group was released. In 2012 he collaborated with Silvio Orlando as an actor and musician. He founded the “Pejman Tadayon ensemble” a project dedicated to spirituality and Sufism. In 2013 the cd “universal sufi music” was released. He teaches oud, târ and setâr and oriental music theory.