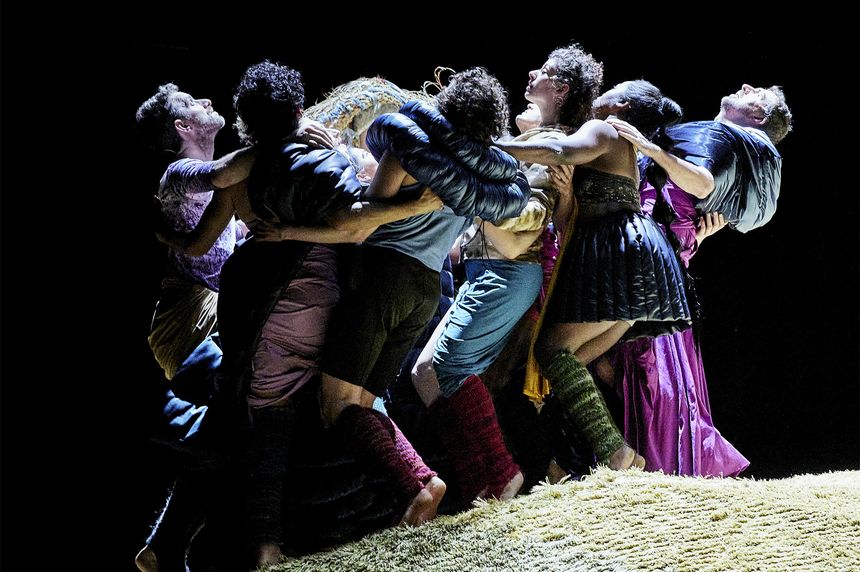 Since 1972, the Festival d’Automne has brought creation and creators to life with a rich and multidisciplinary programme. It extends over several months and allows each work to last.
This nomadic event invests small or large cultural places everywhere in Île de France to offer a wide and diversified range of original cultural creations. Theatre, dance, music, visual art or performances, here is a selection of the shows on offer:

Fathers and sons of Pedro Penim
City Theater from September 28 to October 1
Pedro Penim is a founding member of the collective Teatro Praga , which could be translated into French as “theater scourge”. This gives the color of the artistic work of this Portuguese director and author, close to tg STAN and a collaborative practice on stage. With fathers & sons , he explores a contemporary debate, that of surrogate mothers and family making, thanks to two literary materials. On one side a work of heritage, the great Russian novel of the same title written by Turgenev in 1826, and on the other, the essay by the American Sophie Lewis, Full Surrogacy Now. Feminism Against Family , published in 2019. In this text, she defends surrogate gestation, thus proposing a broader critique of the family as a patriarchal framework. Pedro Penim draws a voice for the present from the classics and thus makes his new play a lively and current place of reflection. Echoing his own experience of fatherhood, he mixes biographical material to create a fiction, real material to renew the traditional family space. Advertising

A another history of the theater of Fanny de Chaillé
Montreuil Theater from November 18 to 27
For decades, the theater has been reinventing itself at the crossroads of the visual arts, dance and music: it is these upheavals and mutations that Fanny de Chaillé recounts in Another History of Theatre. Or how transdisciplinarity has revolutionized our sets and our views, has allowed new stories to find their place. For this, she stages four young performers she met during her latest creation, The choir . Together, they replay great scenes from the repertoire, question their models, their references to play with the boundaries between fiction and reality, to exhibit play and theatrical illusion. Aimed at a young audience, the play calls upon the practice of the actor and his fundamental place in the great history of theatre. At the heart of the show, a central question: why make this choice, basically, to become an actor? Thanks to their bodies and their energy, these four young actresses and actors embrace the whole history of the theater in order to better share it.

T umulus of François Chaignaud and Geoffroy Jourdain
La Villette from 24 to 27 November
In the middle of the plateau, the ground is swollen, covered with greenery. It is a mausoleum, a tumulus, an ancient tomb topped by a hill, a landscape that makes death the very place of life and its deployment. Place of appearance and disappearance for the bodies on stage, this space becomes a theatrical machine, a plastic and choreographic playground. In the room tumulus , François Chaignaud and Geoffroy Jourdain combine their respective artistic practices in a single gesture: a procession where song and dance make the invisible visible and reveal the experience of permanent movement. Polyphonic songs from the Renaissance to the 1970s make the bodies and their breath vibrate. In these musical works, spiritual inspiration, linked to mourning and its consolations, composes an ode to bodies that are no longer. tumulus dreams then of a community of the living sharing on stage, and from the very place of death, the joy of the fragility and the non-permanence of our beings.

Political playlist by Emilie Rousset
Théâtre de la Bastille from November 25 to December 7
On May 7, 2017, the evening of his election, Emmanuel Macron crosses the forecourt of the Louvre on Beethoven’s Ode to Joy. The staging is neat; the polished framing; the solemn step, regulated to the millimeter on the music. The images are shown on all television channels. On August 21, 2020, the actor Manuel Vallade slips into the presidential costume and replays this sequence, filmed by Émilie Rousset’s iPhone. These precarious video means lay bare the theatricality of the image and its staging. Political Playlist prolongs this experience by superimposing on the May 7 march other official events where music has been convened by politics. With the actors Anne Steffens and Manuel Vallade, Émilie Rousset gives to see and hear these archives on stage: from the symphonic enthronement of Emmanuel Macron to the punk farewells of Angela Merkel, she questions the way History is written, staged and orchestrated by the very people who play it.

Dogs of Europe by Nicolai Khalezin, Natalia Kaliada
Berthier workshops from December 9 to 16
In 2049, a man on the run, fleeing a murder charge, conducts his own investigation. His delirious odyssey takes him from the last bookstores in Europe to former Belarus and Russia, now a single European territory under the authority of a secret service. Censored in its country, the play Dogs of Europe, inspired by a novel by Alhierd Bacharevic – also banned by the Belarusian state – offers a visceral and psychological drama depicting a super-state. dystopian in which all individual rights are under control. Alternately eccentric fairy tale, political thriller, futuristic epic and set of war testimonies, Dogs of Europe says as much in the liminal spaces as on stage. The theatrical work of the fourteen performers, of an extreme physicality, endeavors to bring out the origins of the regime, but also the role of creation, in a poignant artistic gesture which accuses the dangers of denial in the face of rising authoritarianism.

Find the complete program of the Festival d’Automne on their website.

51st edition of the Festival d’Automne in Paris