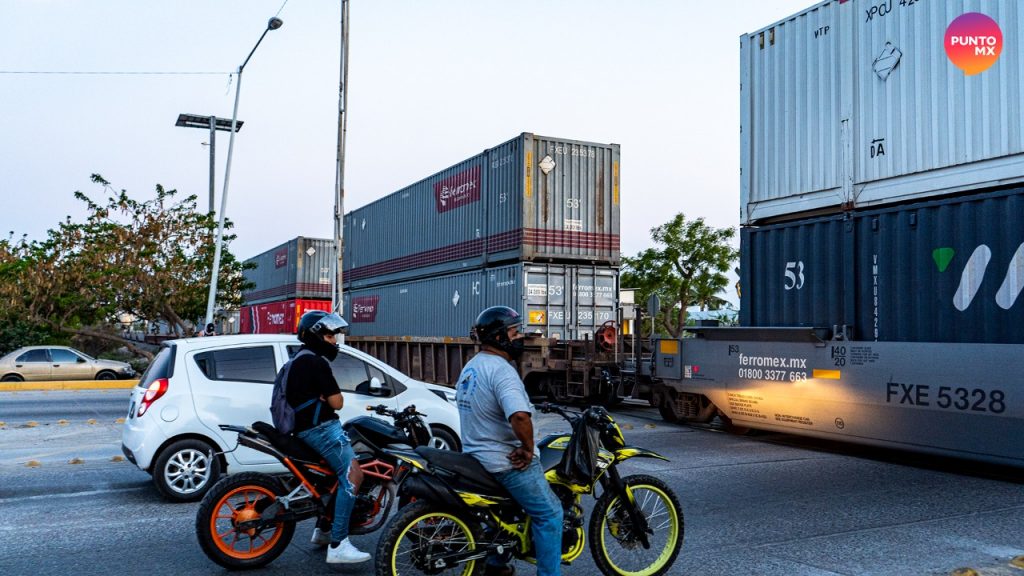 MAZATLAN. – Time passes, but there are indelible marks in the minds of Mazatlecos, such as the sound of the locomotive every time it crosses Santa Rosa Avenue and that remembers that May 31, 1996, when everything took a radical turn for many families Mazatlecas and that left a deep pain that still does not heal, because the wound is still open 26 years after the trenazo.

In the memory of the people that accident that marked an entire generation returns, as a result of speeding and the recklessness of the driver who was driving a public transport truck, which caused one of the tragedies that has shaken the town the most.

A unit of the Trucking Alliance, with the number 1000 in the back, driven with excess speed, overcrowding, loud sound, which added to the recklessness of the driver, and brought irreparable damage.

That truck crossed the railroad tracks and was hit and run over for more than 200 meters by the freight train that was passing at a speed between 50 and 70 kilometers per hour, a 180-ton machine, with three wagons of the same weight, in a stretch of 35 meters, impossible to stop.

Of the 42 passengers, 33 died and 14 managed to survive that dark night, in which the hospitals were saturated and the emblematic Germán Evers stadium became the epicenter for receiving the bodies of men, women and children.

Twenty-six years after the events, Punto MX took on the task of talking with three people who experienced this sad moment from different angles, but who were very close to the scene: Manuel Meza Tirado, survivor; Teresa Bonilla, photojournalist, and Eloy Ruiz Gastélum, current coordinator of Civil Protection, who, as a Red Cross volunteer firefighter at that time, went to help the injured.

One of the survivors of the tragic moment was Manuel Alberto Meza Tirado, who is now 56 years old, he remembers that day that marked his life with a before and after.

He was barely 30 years old, that day he left home to work like any other day, not knowing that later he would experience one of the most difficult moments of his life, which would radically mark even his way of thinking.

Meza Tirado was already the father of a family, he remembers that that night he got into the truck after 9:00 p.m. in the center of the city to go to his house with an address at Infonavit Jabalíes; he sat in the front, on the left side of the unit, but at the height of the UAS, he gave his place to an older person, he would once again occupy a seat in the middle of the truck, on the same left side.

He pointed out that he sat next to the window and among his memories, he remembers that people were getting on and off, from there he could see the driver who was talking with someone who got off on Robles Quintero street, about 100 meters from the tracks. That would be the last stop, since the driver decided to turn up the volume of the music, not knowing that a misfortune awaited them ahead.

“At that moment, I am sitting in a truck full of people, suddenly screams are heard, I was sitting down, I did not have the dimension that the train was close, I turned around and the last thing I see is an intense light, I practically lose consciousness, When I open my eyes I see darkness, I can’t locate where I am, I see paramedics, security people, a series of questions begin, but I didn’t know where I was,” says Meza Tirado.

Manuel, with a sad and lost look, remembering the moment, but with a firm voice, says that that blow opened a hole on the left side where it came from, he was thrown around 30 to 40 meters to fall on the stones that produced him. severe blows, luckily, he says, he was the first one they picked up and transferred to Social Security.

The impact brought him important consequences, so many internal blows and blows to the hand that he had to receive an emergency operation on his stomach to save his life, but the most “deadly” blow was the psychological one, facing reality at the time of death. what happened, since he had to pass the crossing every day when he left or returned home.

At first it was difficult to go through the place, the shock was not easy to overcome, it had been an event that deeply marked his life, and it was little by little that he managed to get out of this harsh trauma.

“When you experience a situation of this nature, you put puzzles together when visitors arrive and they tell you you were saved by a miracle, it is difficult, one does not accept, when you are on the verge of death you begin to react; At first, I did not go through Santa Rosa Avenue, but one day I had to prepare myself and I confronted that moment, I made a reflection, I lost my fear and I took it as an ordinary route, but there are sequels, “he said.

He was a 30-year-old man, he lived in a hurry, he liked parties, spending time with his family, but that night everything changed, there was a before and after; from all the bad, came the most important learning of his life: he would begin to give value to every detail of life.

After 26 years of the events, Manuel Meza comments that as soon as he managed to recover from that moment, he began a social struggle to improve the place, paving Santa Rosa Avenue, which was made to two lanes, as well as the installation of the security pens, a Public Security booth, which allowed changing the environment of Infonavit Jabalíes.

Capturing the fact, by Teresita Bonilla

One of the people who experienced the trenazo from another angle was the photographer of the newspaper El Sol del Pacífico, María Teresa Bonilla Gárate, at that time she was a photographer for the police section, something very unusual in the media in those years: a woman covering the red note, that day everything was strange from early.

It was Friday, May 31, 1996. Teresita Bonilla, as she is known in the media, reports that she arrived at her publishing house at five to five in the morning because she had coverage outside the port, but due to life’s work it was canceled and Once there, he stayed to cover his working day, which ended until dawn, since he had the famous guard.

The day was normal. At night, Teresita went to have coffee at the house of a friend in the Lázaro Cárdenas neighborhood, a few blocks from the newspaper. By the time she decides to return, everyone was looking for her.

“They yelled at me: ‘Teresita, we got a call about an accident, it’s a big train,’ then I got into the truck, I went through 20 de Noviembre and there were parties all over the avenue without them knowing what had happened ahead, the driver He did ten minutes and when he arrived it was shocking to see bodies all over the road, there were people in pieces, “he said.

Teresita was the first to arrive on the scene, and she knew that she had to collect the largest number of graphs to take them to the newspaper, the scoop was the priority at that time.

The photographer with more than 20 years of career in the field, remembers very well that in the place there was a woman who shouted her name, it was a lady whom she had photographed a week before, but she could not help her, the instructions were not to move to no person.

“The moment was strong, but you get used to it, you get used to the idea that it is your job, even if the world is falling, I dedicated myself to taking photos before they beat me, I was the first to get to the tracks,” he stressed. .

The newspaper was already printed and the newsroom was crazy, says Bonilla Gárate, at that time an extra supplement had to be made and was attached.

Bonilla Gárate, with a broken voice, remembers that the driver of the Director of Public Security at the time asked him if his daughter was among the people.

“Something affected me, after living that scene, look, Javier’s daughter, the Secretary’s driver, hurt me a lot, the girl was studious, I knew her as a child, that hurt a lot, I spent days thinking about her, they said she appeared in a taxi, but it’s not true, I know the family and no taxi driver has ever gone to ask the house,” he said.

The most heartbreaking that the photographer remembers was the next day, at the Germán Evers court, where entire families came to recognize their relatives. That scene bent even the hardest heart.

He commented that what he has experienced is one day he took a taxi and around 01:00 in the morning he passed by the train tracks and many cries were heard.

The current coordinator of Municipal Civil Protection, Eloy Ruiz Gastélum, recalled that sad moment, which left a bittersweet taste and deep sadness among Mazatlecos since a great friend of his lost his life in that terrible accident. In what was painted to be a night of partying, dancing and fun, it ended up being a nightmare

At that time, Ruiz Gastélum was a young man of just 17 years old, he was a lifeguard for the Red Cross, and after his day, he and some friends from the corporation had decided to go dancing in what was at the time the club of the World Bananas, in the Golden Zone. There they were waiting for a friend and although the hours passed, that person did not come to the appointment.

“I am well aware that a Municipal Police Unit arrived at that time asking for us, a colleague came out and quickly ran back and said repeatedly ‘we have to go, we have to go’, it was on the way to the place when we found out about the event”, recalled Ruiz Gastélum.

Upon arrival, we were shocked to see everything that had happened, there were personnel from the Fire Department, the Red Cross, the Army and other institutions, all trying to help people.

“That day we had lost a great friend, that’s why he never came to the celebration, we didn’t know about his death, it was until dawn,” recalls Eloy.

Heartbroken by the loss of that friend, the work had to continue, to continue helping people, but the most critical moment would come hours later at the Germán Evers court, which served as a meeting point to identify the deceased.

The court was the collection center for dead people, there the dead had to be classified into men, children and women.

“Families arrived outside Germán Evers, there were so many people who lost their lives, we received the claim, cries, they were very complicated moments for all Mazatlecos,” he added.

“That night of May 31 when my friend died, his sister also died,” said the PC coordinator in Mazatlan with a lost look, as if reliving that moment of sadness, anguish, lament and mixed feelings of a dark night, a indelible date and that still sticks in the hearts of Mazatlan families.

26 years after the ‘trenazo’ of the Santa Rosa, the fact that shook the Mazatlecos