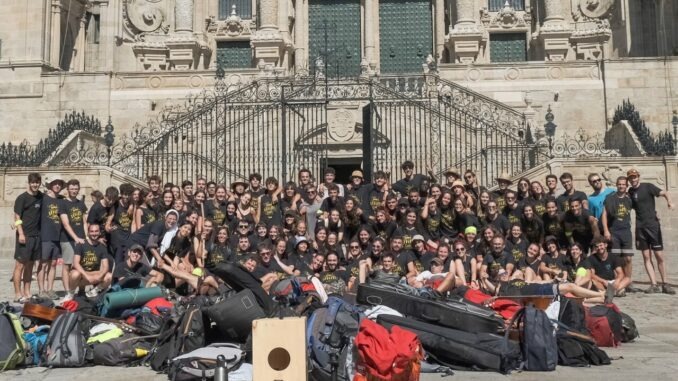 Essentiality, effort, service, sacrifice marked, together with various and intense moments of spirituality, the ten-day pilgrimage of the 103 boys and girls of the Diocesan Youth Ministry of Perugia-Città della Pieve to the sanctuary of Santiago de Compostela; a journey that began on 24 July and ended on the evening of 4 August, along almost 2,700 kilometers, the last 120 of which were on foot. Some young people left with many questions and doubts, but, along the way, they changed their minds, being fascinated by the truly unique human and spiritual experience and to be repeated even in different situations.

«God speaks to man and not only to the Church, above all through the experiences of other people – says one of the 103 pilgrims -. The one in Santiago was a pilgrimage that marks and changes you, tomorrow will no longer be like yesterday. Not using a mobile phone and living on just ten euros a day was not easy, but it made you understand that you can do it anyway, that the most important and necessary things are other. It was an experience that gave you the opportunity to question yourself, making you understand the importance of knowing each other and helping each other. The most surprising thing is that God encounters him precisely in the other and the journey to Santiago helps you in this encounter ».

A pilgrimage which leaves a mark on these young pilgrims, a sign, precisely, of a living diocesan Church thanks also to the youth ministry led by Fr Luca Delunghi, organizer-animator of numerous similar experiences that shape young people to life. Among the participants there were also several animators of the Perugian Oratories, accompanied by their diocesan leader Don Riccardo Pascolini, as well as some volunteers of the diocesan Caritas with the director Don Marco Briziarelli.

He recalls that “the pilgrimage was also an experience of service, communion, relationships and a restart after the acute phase of the pandemic. The Way of Compostela also brings out our frailties, our tensions, but the beauty is to see our edges smoothed out ».

Don Briziarelli takes the opportunity to announce another significant experience of service and faith, that of fifteen young people from Perugia-Pievesi who will live, from 13 to 20 September, at the “Mission House” in Kosovo, a welcoming reality open to all launched in 1999 by Caritas Umbria after the end of war hostilities in the Balkan region. An area of ​​Central-Eastern Europe with periodic and worrying fibrillations between different ethnic groups and cultures (the last dates back to a few days ago, in the north of Kosovo on the border with Serbia). The Caritas reality, born from the commitment of the Umbrian Church, testifies how people of different nationalities and religions can live peacefully among themselves.